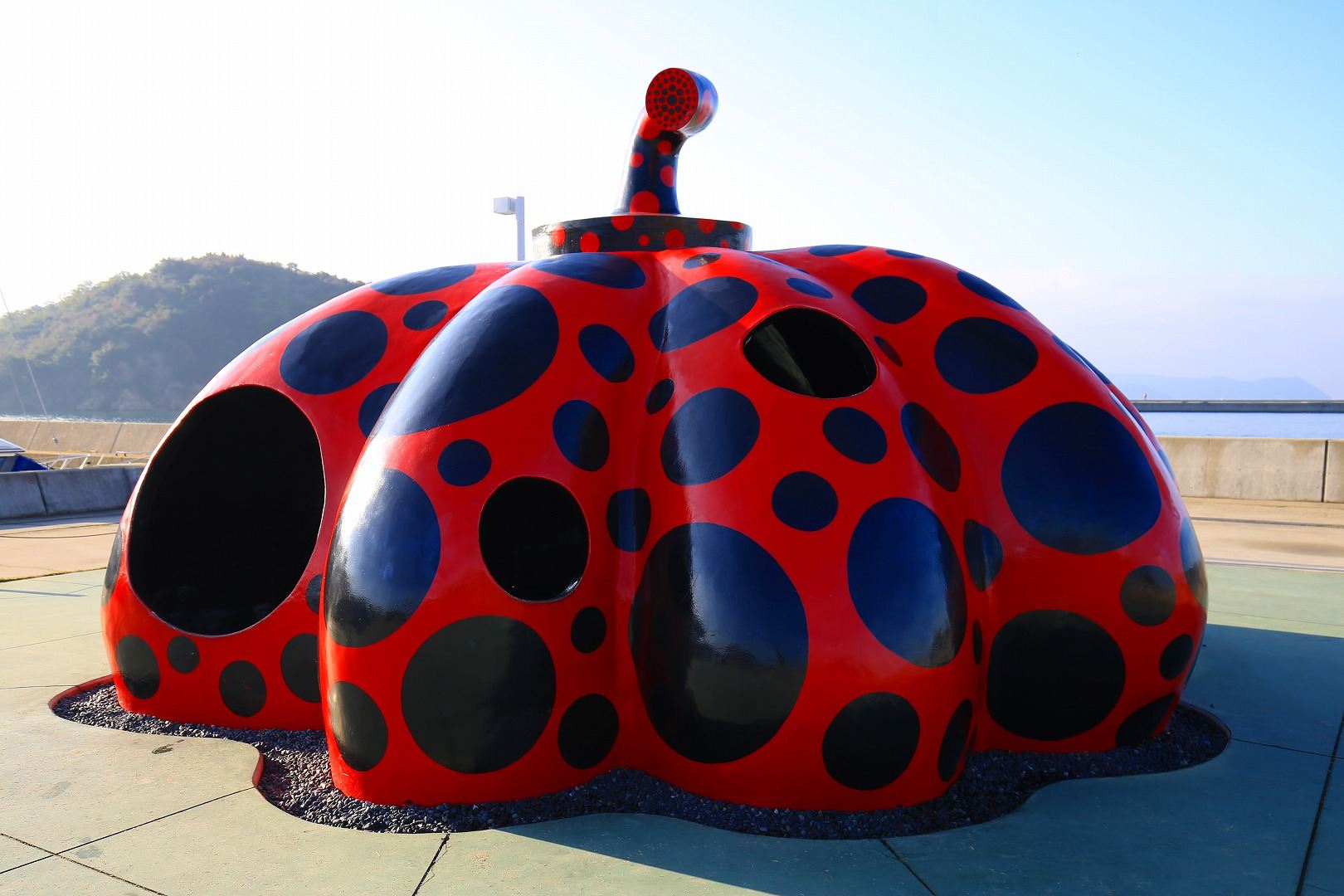 From the yacht, I found the Naoshima island, and looked hard at the island and saw something red. Closing to the island, the red one became more clear for me. On the top, there was a kind of calyx of a vegetable, and there were black dots in the red. Yes, it was the "Red Pumpkin" of Yayoi Kusama, very popular artwork of Naoshima. It is the most well known piece among all "the Pumpkins" of Yayoi Kusama. By this sight of, I found myself that I was in Naoshima island at last. After this, I saw so many people in the port at the landing. Japanese and foreigners were making the queues. I have been convinced that as there were so many people in this small island of the Seto inland sea and it should have been true that the prefecture of Kagawa would be popular in the world. Especially, this year 2019 is the 3rd year of the art festival Setouchi Triennale, so the number of visitors sould be biggner than previous years.

By walking in the crowdy port, I found out one thing. The looks of the people were very similar. The people who came to visit the island looked so happy, of course, because they were about to go sightseeing, but the ones who waited for the ferry to return, they looked a little tired, but they showd so satisfied expression, and they lookes very happy.

I tried finding the way to the bus station in the happy people crowd. I knew that it would be easier to take bus to go to the different spots of artworks. We could go there on foot, or by bicycle, but as it was so crowdy, it had to take the time to walk and there should have been no rental-bicycle available. So I chose the bus (the bus comes when the ferry arrives at the port), and I went to Honmura area.

Honmura area is known as a beautiful old-fashion district. There are many houses, the town hall, temples.

It had been very bustiling streets, but because of the depopulation and aged population increased, many private houses became vacant. In general, those vacant houses should have been kept as they were, but in Naoshima, those houses were changed into the modern art. This is called "Art House Project". The first project has been done in 1998, "Kadoya", then "Minamidera", and now there are 7 Art Houses in Honmura district. They are found very closed and we can go to see all of them by walking.

I chose to go there by walking. As there would be a hill, I knew that it had to be a little hard way, but as the weather was so beautiful to take a walk and as I wanted to see the landscape, I decided to walk. It was a way along the sea, and there were many artworks in the way. Not only the "Yellow Pumpkin" of Yayoi Kusama, there are many small arworks that we could not find from the windows of the shuttle bus. It is said that it took normaly 30 minutes to go, but I took almost one hour to take a walk.