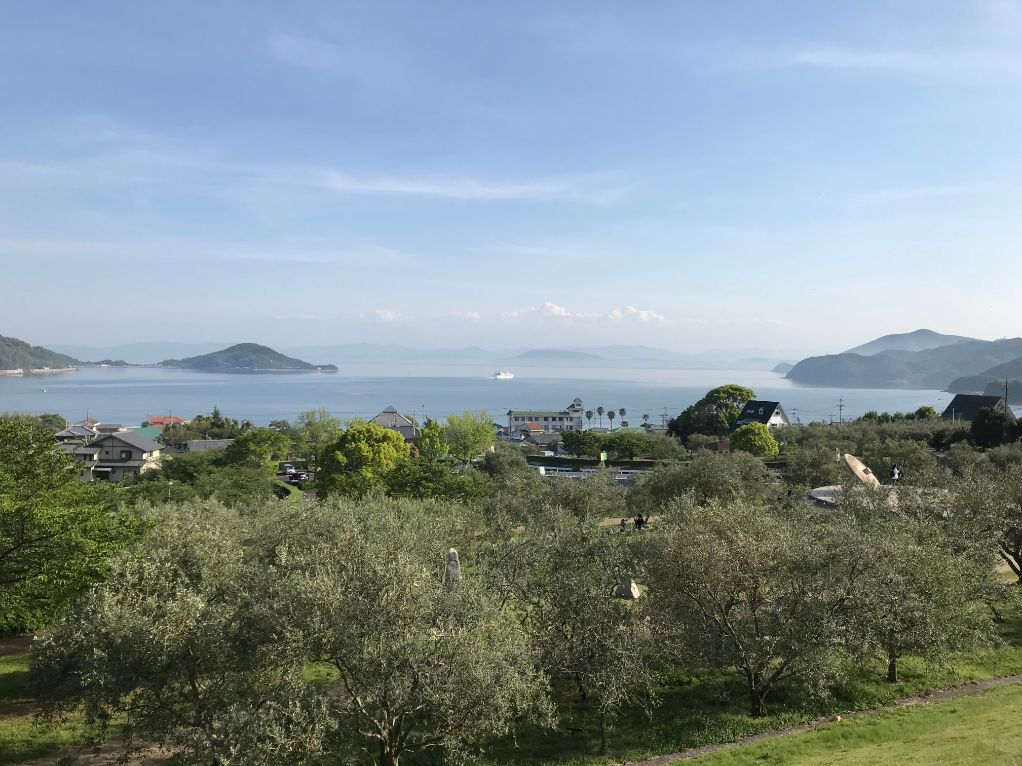 
From the Tonoshoko port, I went to the east by bus to go to the orchard of olives.

It took about 20 minutes by bus from the port to reach to the hill where Shodoshima Olive Park was located.
From the bus stop to the park, there was a gentle slope to the park, so I went up.
It was not very hard to get there.
In my sides, there were olive trees in the feild, so I could take a walk between the trees.
When I walked for a while, I found a white windmill in the field.
I found some ladies jumping with brooms.
(Later, I have been informed that this place was the location of the live-action film "Kiki's delivery service" ("Majo no takkyu bin" in Japanese. I remember that I saw the people in black dresses).
I saw down from the site of the windmill. There was a beautiful contrast between the blue Seto inland sea and the peninsula of Tanoura in greeen over the sea stretching across the south east of the island.

There was a roadside station nearby, so we went there. I found that we there was a workshop of handicraft.
We did not have enough time to do that but it seemed interesting.
There were many souvenirs and many variation of olive oils.
After so much hestiation, the time was over for the bus, so I could not buy anything. I regreted to be indecisive.

When we got on the yacht, it got very dark after the sunset. I decided to sleep on the yacht on that day, and as it was the first time for me, so that I was wondering if I could fall asleep. So, I moved from the solid ground to the swaying yacht. But when I laid myself on a pillow, I felt being on a hammock, and found nice to be in the yacht. However, in a middle of the night, I fall down from the bed by the big wave.