Let's keep on with our series about Japanese ghosts and legends! Today, after Yotsuya Kaidan and Bancho Sarayashiki, we continue on a gloomy but poetic love story: Botan Doro, the peony lantern. The latter became popular in Japan in the 17th century, during the Edo era, while the population loved kaidan (ghost stories) and it would have been inspired by a Chinese tale adapted for the archipelago by the writer Asai Ryoi in his collection Otogi Boko.

As usual, we warn you here that the legend has undergone several modifications and versions change depending on the times, adaptations, etc… We will try to tell you about it in its most common form. Here is the story: 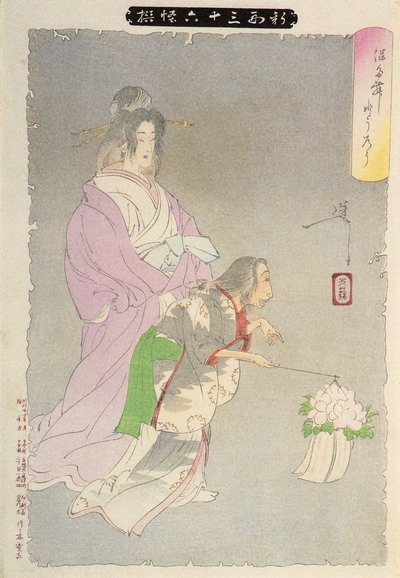 Obon, the period when ancestor's spirits come back to visit the living, usually takes place in August (dates may change according to the lunar calendar) for 3 days. A long time ago, on the first night of Obon, a man (from one version to another a student, a widowed samurai, etc.) noticed a very beautiful woman walking by her house with her maid carrying a peony lantern. It was the beginning of a passionate love story. Every night, in the light of the lantern worn by the maid, the young woman named Otsuyu joined her beloved and this one sank each night further into passion. A neighbour, worried about no longer seeing the man, decided to visit him one evening, curious about these mysterious visitors that passed in front of his house each night. Peeping thrgouht the bedroom door, he almost fainted when he discovered the man entwined in the arms of a skeleton. He ran to warn the nearest Buddhist priest whom managed to convince our protagonist that he was in great danger. It is then decided to create a protective charm around his house intended not to let in those belonging to the world of the dead. This one is efficient, and every night Otsuyu and her servant came to the door crying, reminding the man of their passion. The latter, who lived only in sadness and love for Otsuyu, saw his health getting worse and worse, because of despair. One night, unable to resist, he removed the charm and let the two women in. At the end of a last night of love, he will also die, and his corpse apparently had a radiant smile, his soul taken to the world of the dead where he will live forever with his beloved Otsuyu.

There are many adaptations to this legend, although those made in the cinema have not become very famous, we nevertheless recommend that you watch the movie Botan Doro of 1968 by Satsuo Yamamoto which emphasizes the love relationship in history. Like many legends, this one was adapted for the Kabuki Theatre, whose history changes a little, making the man a student who was already in love with Otsuyu when she was still alive. So beware of your old love stories! These may well take you on your last journey...