The rabbit of Inaba

This tale comes from the Kojiki or "Record of ancient matters", a Japanese chronicle of myths and legends concerning the origin of the archipelago.

" Who between rabbits or sharks are the most numerous? "

- Let me check that, make a line until Inaba. " 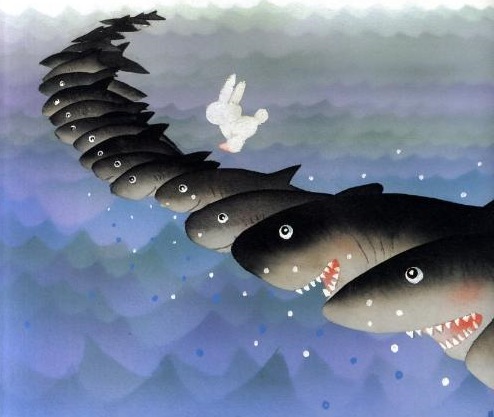 Cover of a child book

"Hop and hop": while counting the sharks, the rabbit crossed the sea where a path of scales has formed.

But just before reaching its destination, the not-so-clever rabbit bragging a bit too loudly

is overheard by sharks, upset, that rip off its fur...!

Okuninushi brothers were on their way to woo Princess Yagami of the Inaba province, and saw the scene while passing by. They call out to the little fool:

" Poor thing, you should wash your body in the sea and let the fresh air dry it, you will be healed. "

Of course, with such a treatment, there is no way the wounds would heal and the pain keeps spreading!

Okuninushi no Kami, who was behind because he had to carry his brothers' baggage, hasten to help the suffering animal:

" If you wash your body in clear water and roll in the pollen of cattails3, you will heal! " 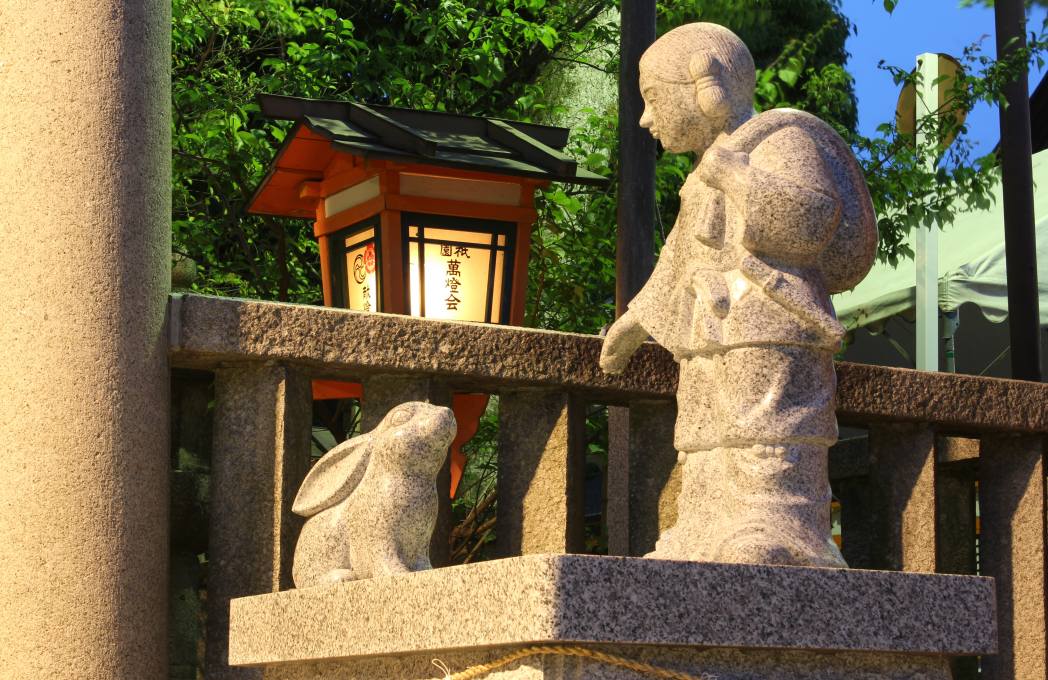 Following his advices, the rabbit's body is restored to its original state while the wounds are closing.

As a sign of gratitude, the small animal tells this propecy to his savior:

« The Yagami princess will choose you and your good heart. »

And just like the rabbit predicted, Yagami Hime no Mikoto princess fell in love with Okuninushi no Kami.

1. Most of the popular tales and effigies show a white rabbit. But in the original text, the rabbit's fur i believed to be brown and the animal is sometimes considered as a hare, rather than a rabbit, in some traductions. Therefore, we choose not to mention the color of its fur.
2. In the chronicle, the Japanese word “Wani” is used for phonetic reasons, but literally means "crocodile". Sources agree on the fact there was no saltwater crocodile in Japan and the term is meant to depict a sea creature.
3. The common cattail or great reedmace is an herbaceous plant, always found in or near water.