Thatched roofs in Japan: Shirakawago but what else?

When it comes to Japanese traditional houses with thatched roof, books and other travel tippers often write about the Ogimachi village in Shirakawago (mostly known under the name of its location). Enlisted in the UNESCO’s heritage in 1995, the popularity of this large village in Gifu prefecture is well deserved. If this is your first time reading about it, now is a good time to check here.

This article is meant to let you discover other villages, certainly not as bigger nor as older than Shirakawago, but as much amazing with their regional specificities. And this is the perfect time of the year to do so: thatched roofs in Japan show that the area experiences heavy snowfall. This peculiar architectural style is called  "gassho" and helps the snow to slide down, avoiding it to weigh on houses’ foundations.

If you want to avoid Shirakawago crowd, here are four villages that will offer you a similar experience, with their respective charms! 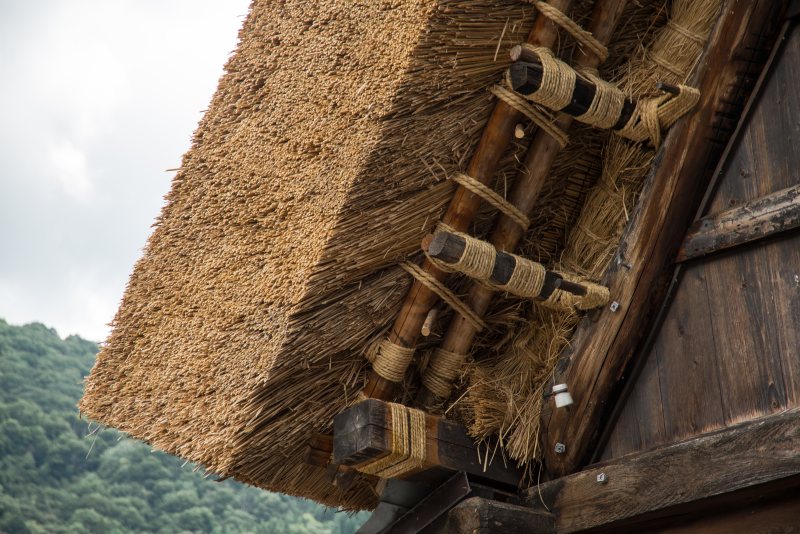 Iyashi no Sato is a big village near Kawaguchiko and the famous Mount Fuji, with an easy access from Kawaguchiko on the bus (a 3 hours ride in total, leaving from Tokyo). The village hosts many gassho buildings and is surrounded by a luxuriant nature. Despite these qualities, the place is less known probably, because it has been opened quite recently.

Indeed, this old farmer village was destroyed in 1996 by a landslide, then rebuilt as a traditional yet educative village that opened its doors in 2006. The inside of the houses is brand new and each of them has a specific purpose. You will find art exhibitions in some, Japan’s historical exhibitions in some others, and an ancient atmosphere in others.

Iyashi no Sato is well thought for welcoming visitors with facilities such as public toilets and three restaurants (a bit expensive).

Come and try one of the many experiences: wear a traditional kimono or become a samurai or a ninja; experiment diverse crafts such as pottery and tsurushibina (an old craft consisting in making small fabric dolls and hang it as some kind of mobile).

If you are lucky and the weather is good, you might see the glorious Mount Fuji, especially from the second floor of some houses.

There is a 310 yen entrance fee, in addition to the activities you will try. 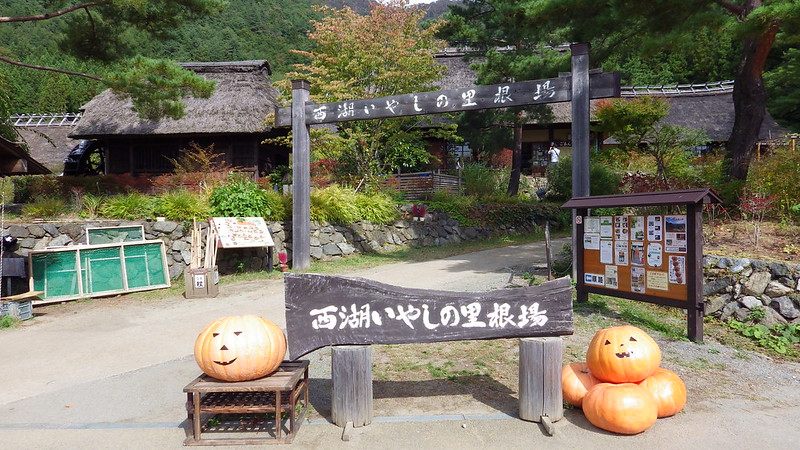 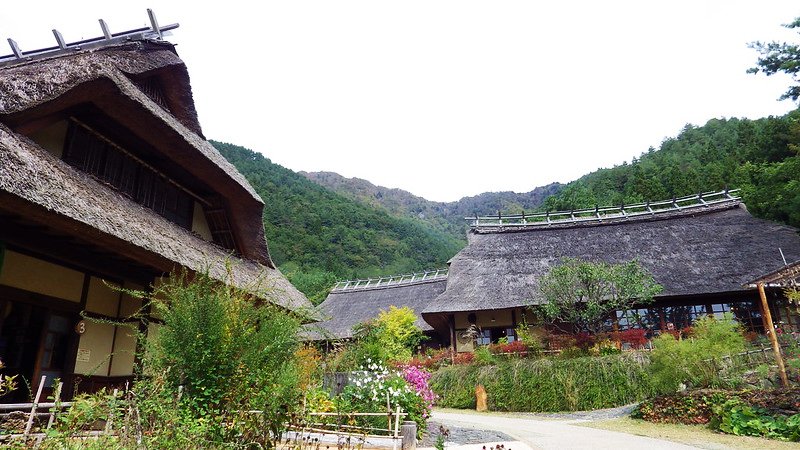 At the southwestern tip of Toyama prefecture, in the region of Gokayama surrounded by huge mountains, lies two villages with gassho houses: Ainokura and Suganuma.
Both are enlisted as a world heritage at UNESCO since 1995 but are less popular because of a difficult access and a smaller surface area than Ogimachi. Yet, these two villages are just like their hosting region, rich in traditions and culture.

On the shores of Shogawa river, Suganuma is composed of two areas: the village of Suganuma and the village of Gokayama Gassho. Suganuma hosts nine old farmhouses with thatched-roof called "gassho-zukuri": five are enlisted at UNESCO. Before this title, the village earned in 1970 the distinction of National Historical Site and of Important area of protection for historic buildings in 1994.
In an effort of transmitting and preserving this heritage, houses were transformed into guest-houses, restaurants or museums, to welcome many visitors.
Some buildings were moved to Gokayma Gassho no Sato. This part of the village is located across a tunnel and is inhabited, but is being by schools for educational trips. Three of its buildings, named “Gassho-zukuri Cottage Gassho no Sato”, can be rent to stay the night.

Learn about Japan’s history, discover local traditions at the Gokayama Folk Museum, and master the process of making salpeter (an essential component of gunpowder and major industry of the region during the Edo period) at the specialised museum Ensho no Yakata. 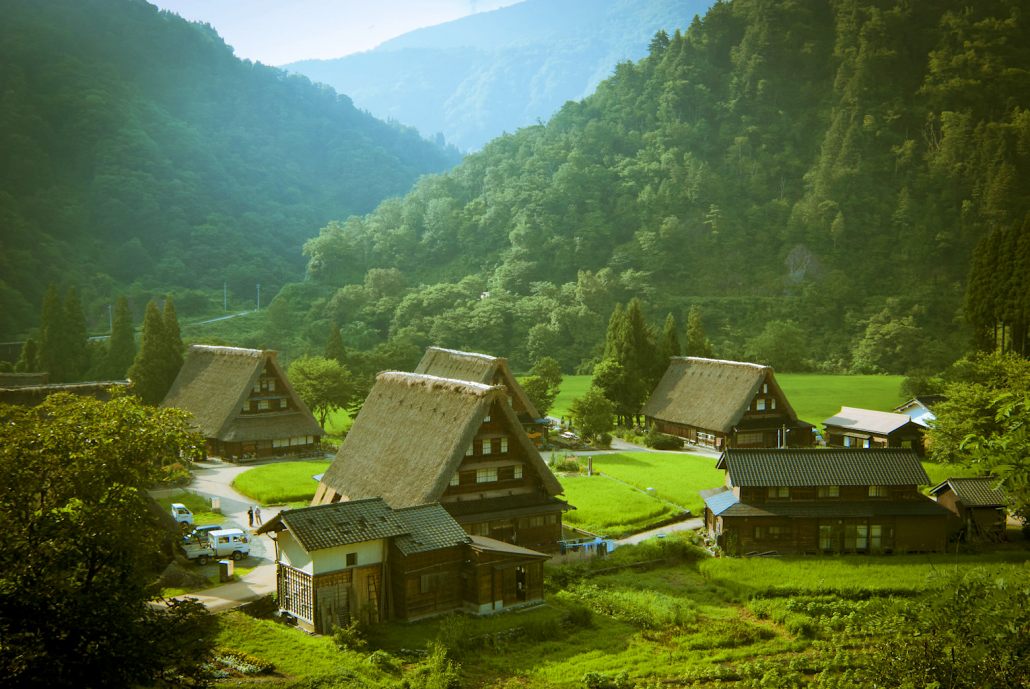 As for the small village of Ainokura, it received the same distinctions. It also earned the status of “most remote village” of the region. Thanks to its location, Ainokura perfectly retained 20 gassho houses which are nowadays private residences, restaurants, guesthouses or museums.
The oldest building is supposed to have been built during the 17th century. Being hard to reach, Ainokura regional heritage is well protected and you will be able to learn about it at the local Folk Museum as well as learn about the local industry of sericulture at Ainokura Traditional Industry Museum.

Ainokura village is definitely less touristy than Shirakawago, but the facilities are comfortable and you have the possibility to stay in a traditional house for the night, which will highly facilitate your trip there.

A walk on this agricultural land, with stone-low walls, sloping thatched-roofs and gorgeous surrounding forest, is like a leap through time.

In both Ainokura and Suganuma villages, you will find local craft products in the souvenir shop, such as Washi paper. 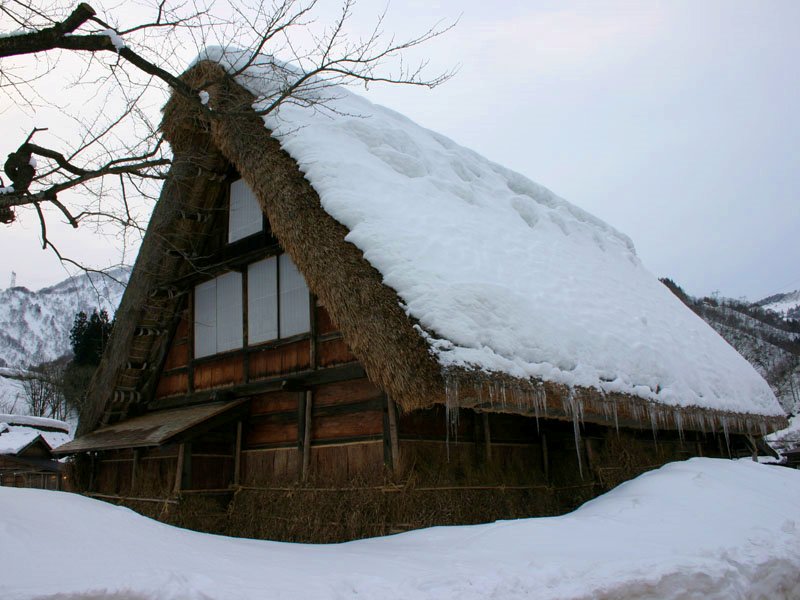 Our last recommendation is located in Kyoto’s northern district, in Miyama-cho. Out of 50 traditional houses, 38 are built following this peculiar and convenient architectural style. Their edification is estimated between the 17th and 19th century. Kayabuki village is not enlisted as UNESCO’s World Heritage but received the distinction of Important Area of protection for historic buildings in 1993.
It is not surprising when you look at the perfect state of conservation of the local Gassho houses, thanks to the difficult access to the village from other areas that requires to pass through Kyoto’s mountains (train and local bus).The local people are putting great efforts  to maintain it: a local association of preservation exactly rebuilt the house acting as a museum, that burnt in 2000, while following the traditional techniques.

You will be able to enjoy a night in a traditional house and discover daily life tools and utensils from another decade, at the local Folk Museum.

Like its peers, Kayabuki is barely known by foreign tourists and even Japanese people, but has the proper facilities to welcome you: before leaving, buy a souvenir or craftsmanship at the local shop.

Enjoy a lovely and nostalgic stroll, through a different Kyoto. 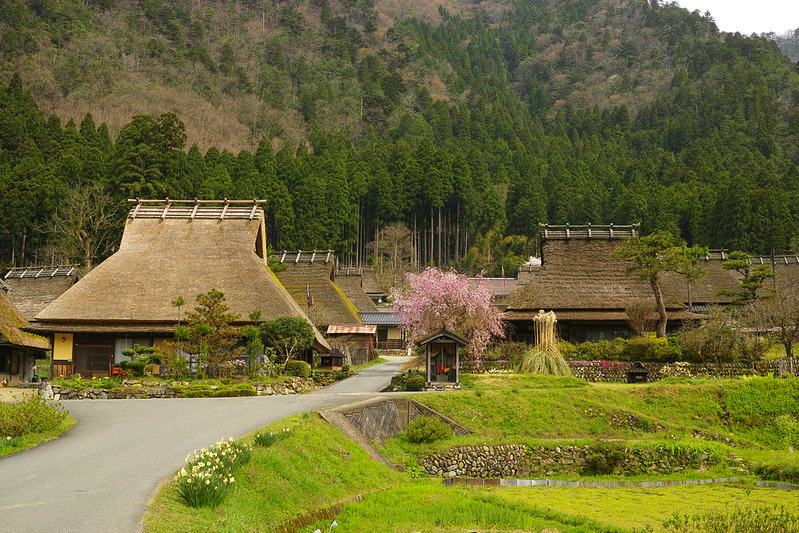 In conclusion, we would like to quote UNESCO's description which perfectly apply to all the villages:

"The large houses with their steeply pitched thatched roofs are the only examples of their kind in Japan. Despite economic upheavals, the villages of Ogimachi, Ainokura and Suganuma are outstanding examples of a traditional way of life perfectly adapted to the environment and people's social and economic circumstances.".