Kitsune ("fox") is represented in many Shinto sanctuaries "Inari". The best known is certainly Fushimi Inari shrine in Kyoto for its thousands of Torii (red entrance gate). The animal is a deity, a messenger of the gods but also revered for the good cultivation of rice, because the fox chases rats to preserve crops.
He is also considered as the god of success for a business and deity of mountains. 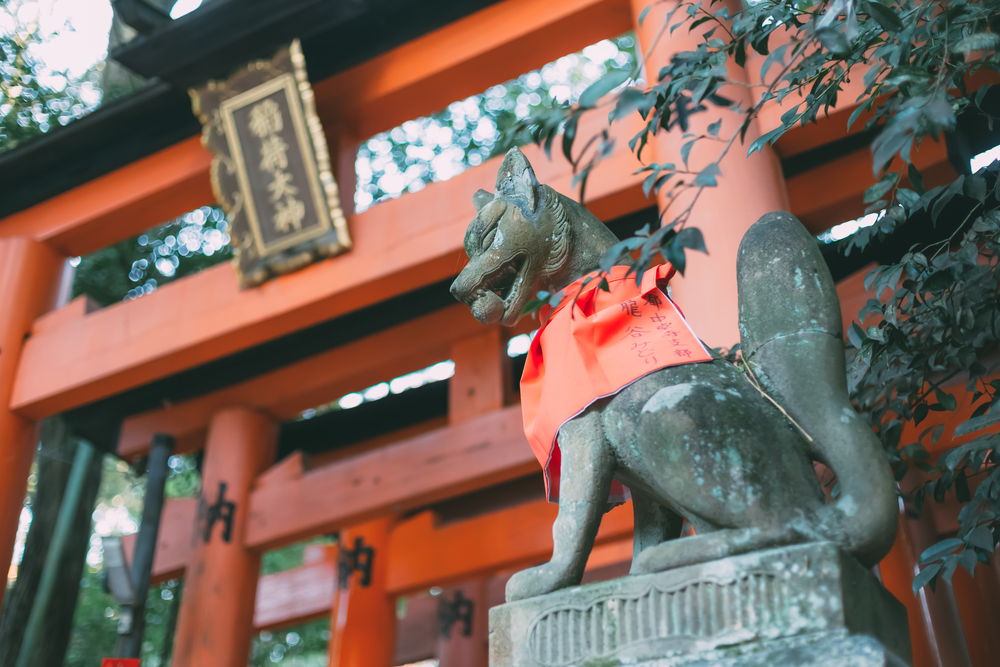 🦊Set foot into its den, if you dare, during a journey across essential heritage sites of Japan !
You will be able to see for yourself its famous home of Fushimi Inari Taisha in Kyoto.

A pair of Komainu statues are like lions, facing each other, guardians placed at the entrance of the sanctuaries. They are there to repel evil spirits. The name Komainu would mean "lion of Korea" although it originated from the Tang Dynasty in China, and would also be present in the ancient Egyptian and Indian civilizations. They can be admired especially in Nara, or on Itsukushima Island. On the Okinawa archipelago, they are called Shīsā, watchdogs.
The male, placed to the right of the entrance to the sanctuary, often has his mouth open to ward off evil spirits, and the female onthe left, with her mouth shut to preserve happiness. 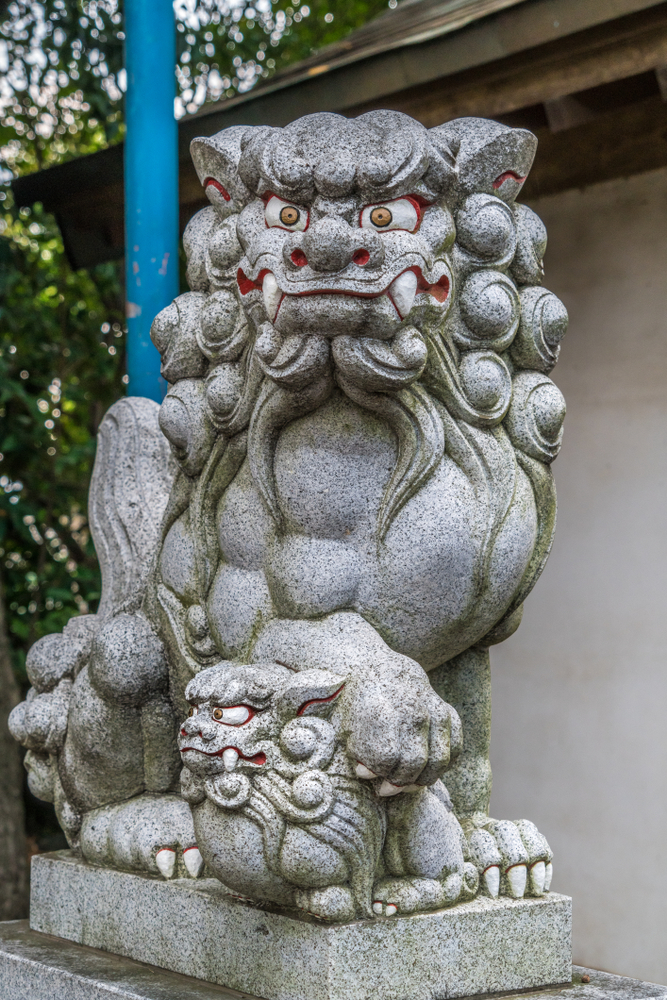 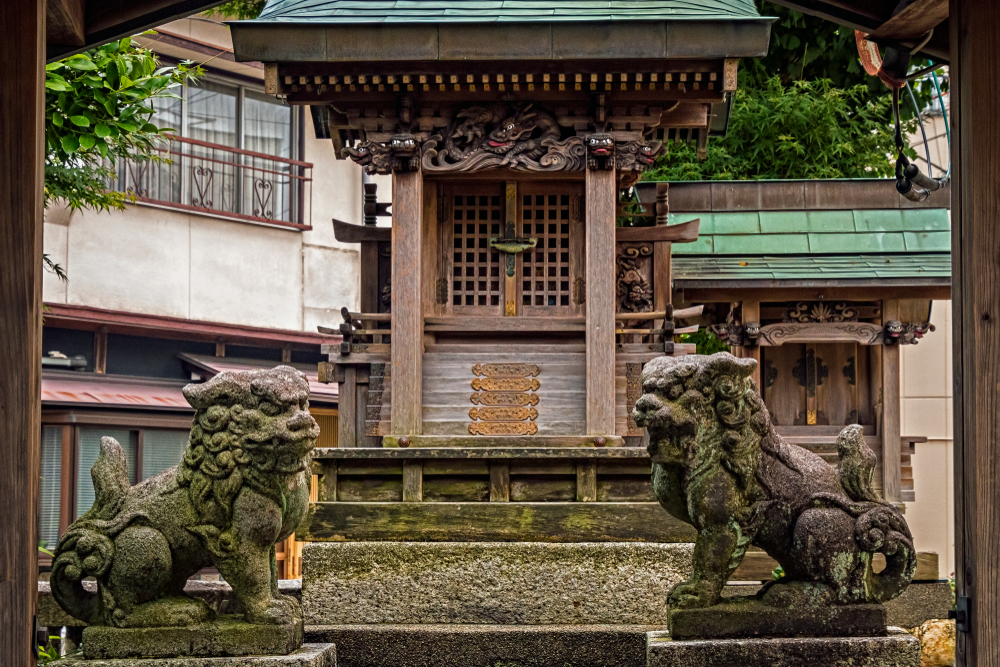 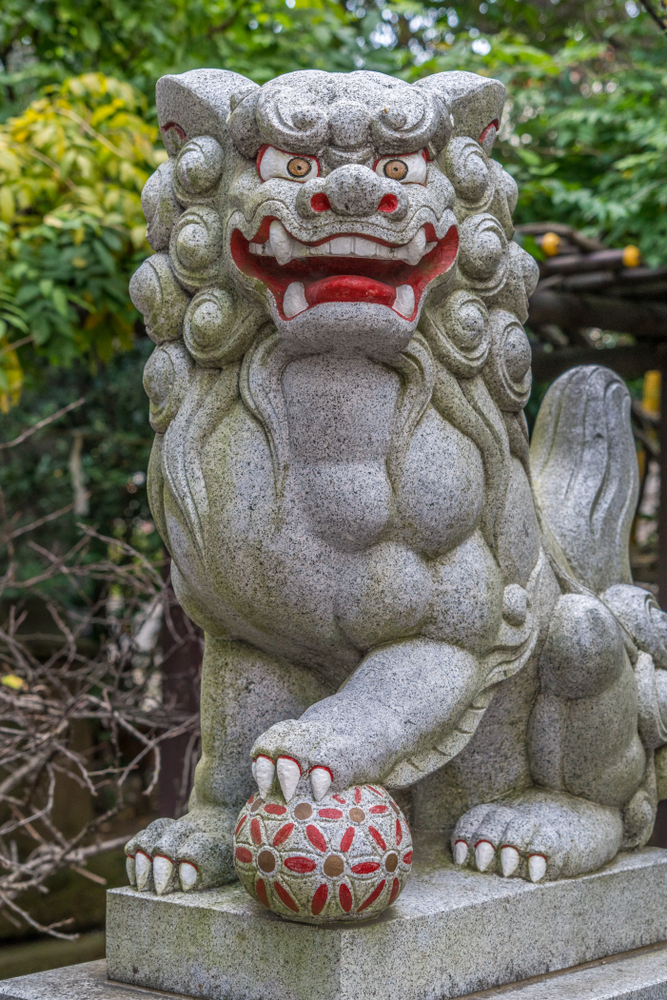 🦁 Discover other islands in Japon by traveling around Setouchi islands!

Yatagarasu is a mythological animal of Japan, a three-legged crow. Each leg has meaning: the first leg representing the sky, the second one is the earth and the third one is the people.
According to the legend, the raven would have helped Japan's first emperor, Emperor Jinmu, to find his way to Kumano (Wakayama prefecture) and then Yamato (Nara Prefecture) before winning against a local chief.
Jinmu is considered by Shintoism as a descendant of Amaterasu, the great goddess of the sun.
The raven is also the emblem of the Japanese football team, and at the the Yuzuruha temple in Kobe, dedicated to the divine crow, the statue represents a soccer ball bearing this symbol. 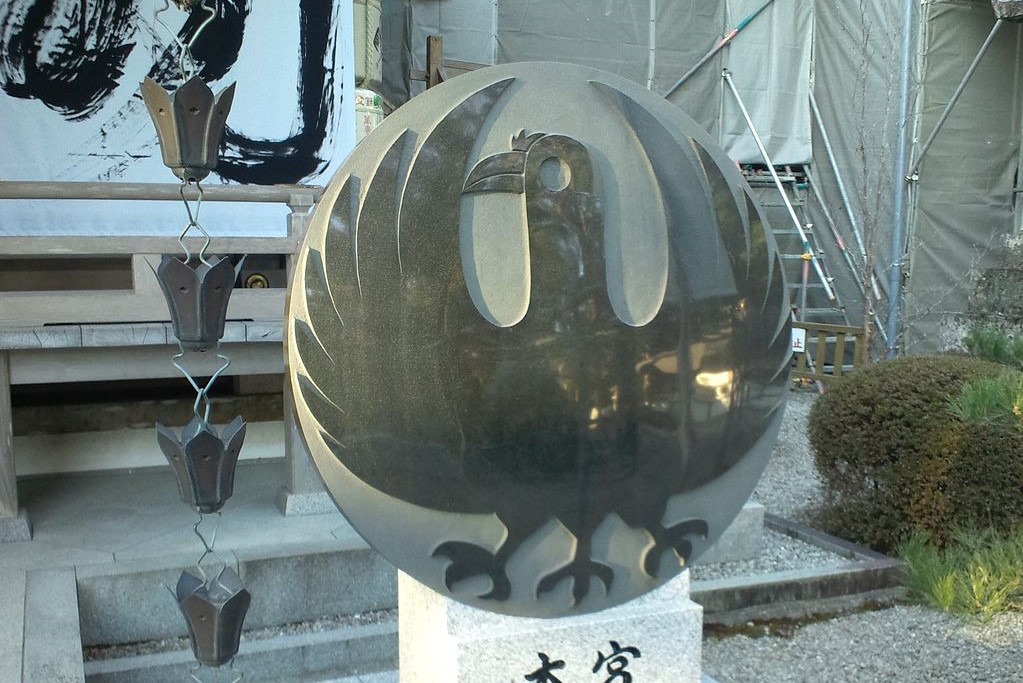 Japanese famous painter, Katsushika Hokusai painted a phoenix on the ceiling of a temple in Obuse City, Nagano Prefecture. This mythological creature is originated from China where it is considered as a benefactor and auspicious symbol of wisdom, benevolence, fidelity, righteousness and propriety. The phoenix is a hybrid animal, with a snake's neck, a goose bust, a turtle's back, and its body is covered with scales.
In Japan, it is perhaps one of the most powerful deities, symbol of immortality and longevity. It would appear only to announce a new era and in prosperous and peaceful time. It is represented in particular in the famous temple Byodoin, located in the Kyoto prefecture. 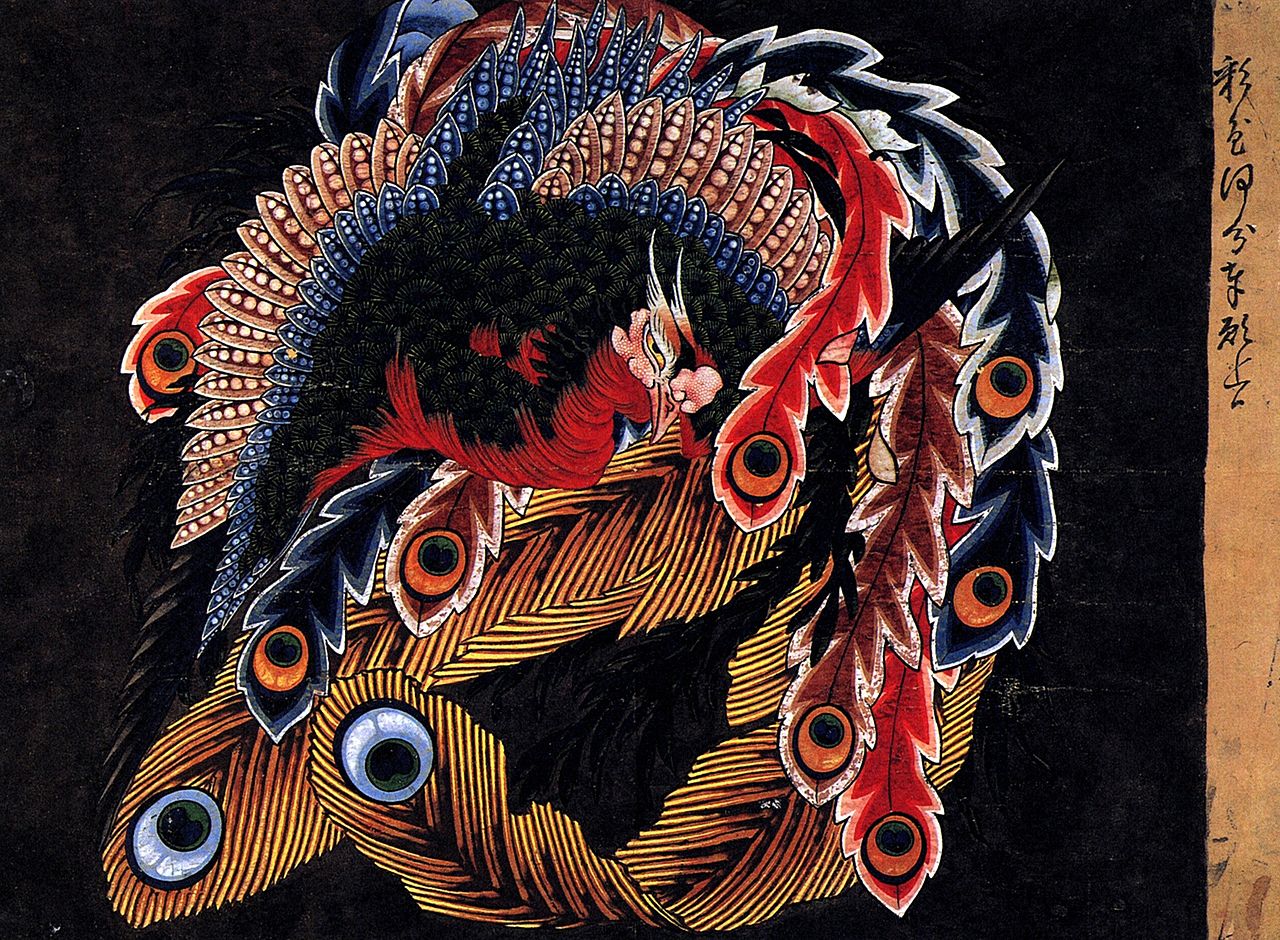 Like the phoenix, kirin is a mythological creature of good omen, enjoying the peaceful and protected places, its appearance is synonymous with prosperity. Conversely, his death would also be the announcement of difficult time, like the death of a sovereign. It would have the body of a large stag, although his skin is covered with scales like a dragon, an ox tail, the skull of a wolf carrying deer antlers, the hooves of a horse.
It can also be represented as some sort of unicorn associated with the notion of guilt and justice. This animal is found in many legends of Asia including China and Vietnam. In Japan, you will see this creature printed in the bottle labels of the famous Japanese beer brand Kirin. 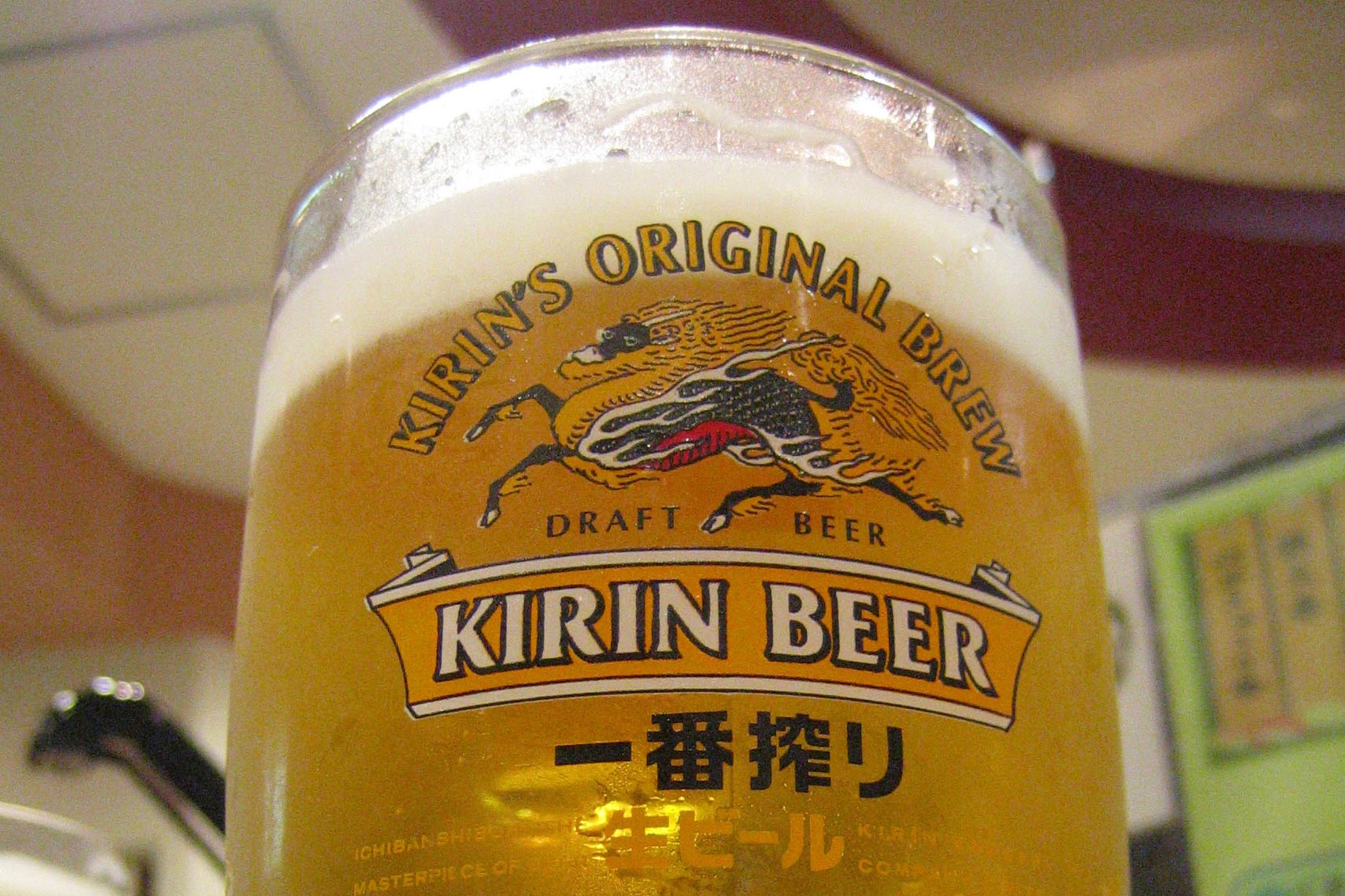 🍺Why not taste an other Japanese alcohol, the sake, after a cycling tour at the foot of Mount Fuji ?!

The white snake, animal considered as one of the seven gods of luck, would be a messenger of the goddess Benzaiten (the goddess; however, is more associated with Japanese Buddhism and represents art, music, and eloquence. The Bentendo temple is dedicated to her as well as a temple located on the Enoshima island of Kanagawa prefecture).
They are messengers sent to earth, often associated with dragons. Crossing the road of a snake is a good omen in Japan.
The animal would also deliver the wealth; and therefore, some Japanese people put charms related to the snake into their wallets. 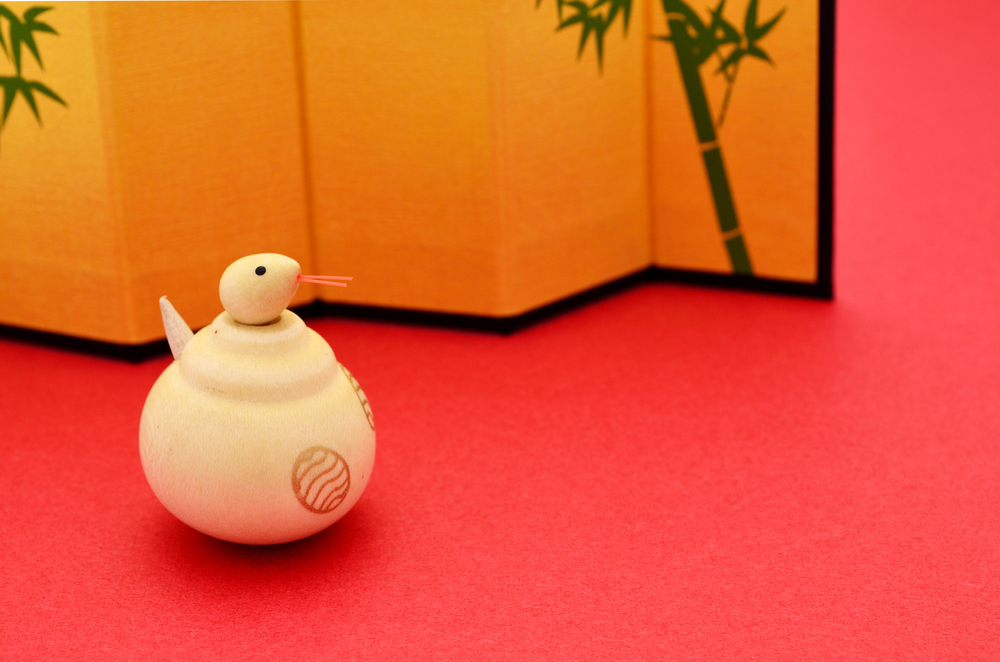 The dragon holds an important place in the beliefs towards the Kami (the gods). This dragon would live in a gigantic palace in the seabed of Ryugu-jo. It is a true lord of the ocean, protector of marine life and god revered against drought. He would have, according to legends, taken human form and would be one of the ancestors of the first emperor of Japan, Jinmu. 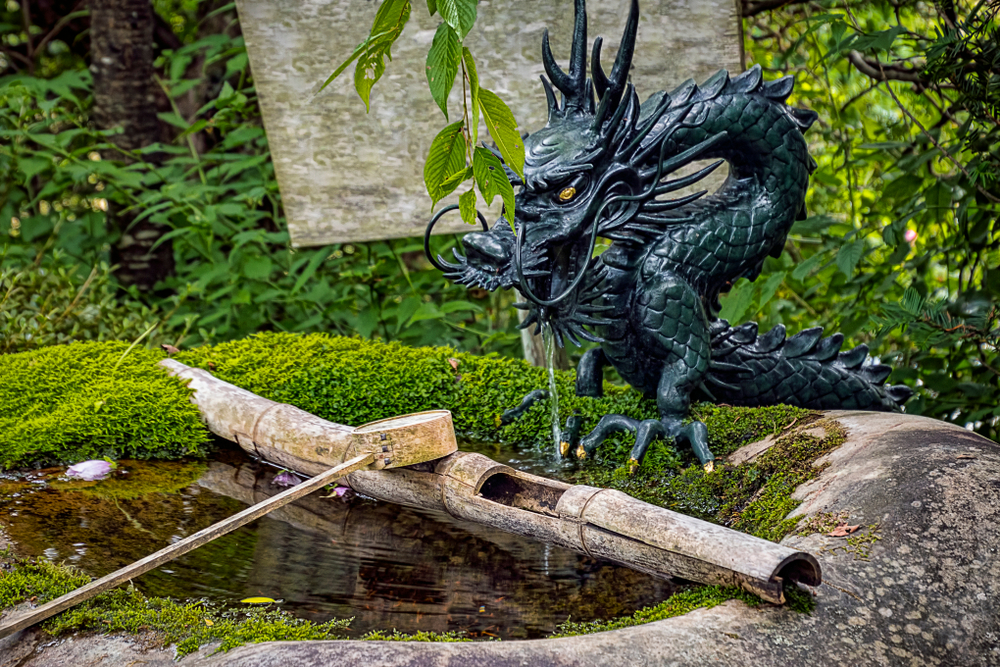 The dragon is often visible on fountains where one purifies oneself by washing one's hands before entering Shinto shrines. In Nikko, in the famous Toshogu, a dragon adorns one of the rooms of a building, as well as the Senso-ji Temple at Asakusa.

🐲Visit the dragon by hiking through Japanese history in Togakushi, where its temple is located! 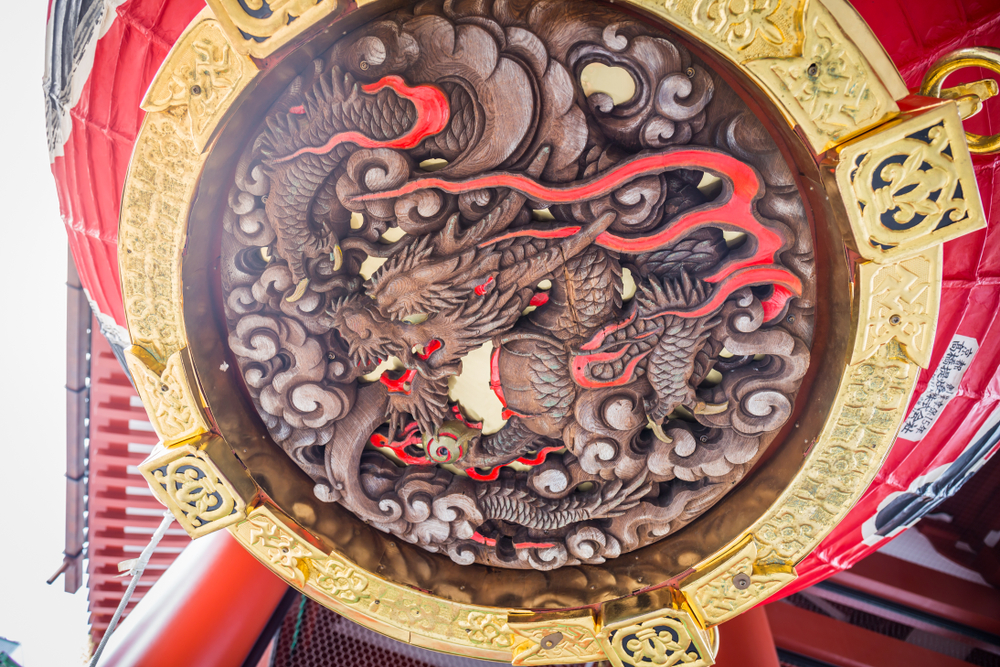 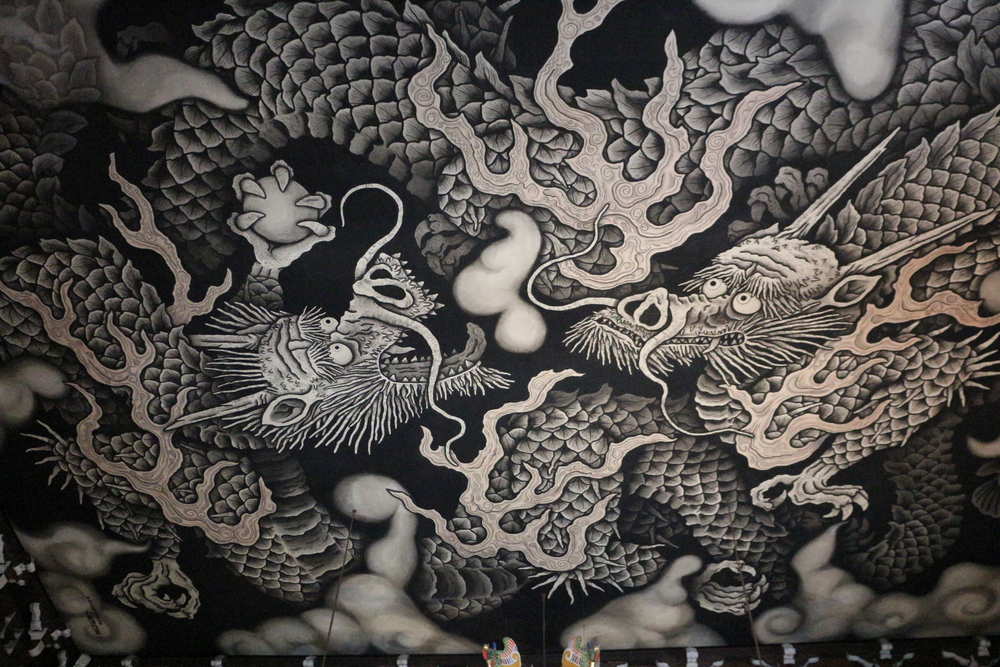 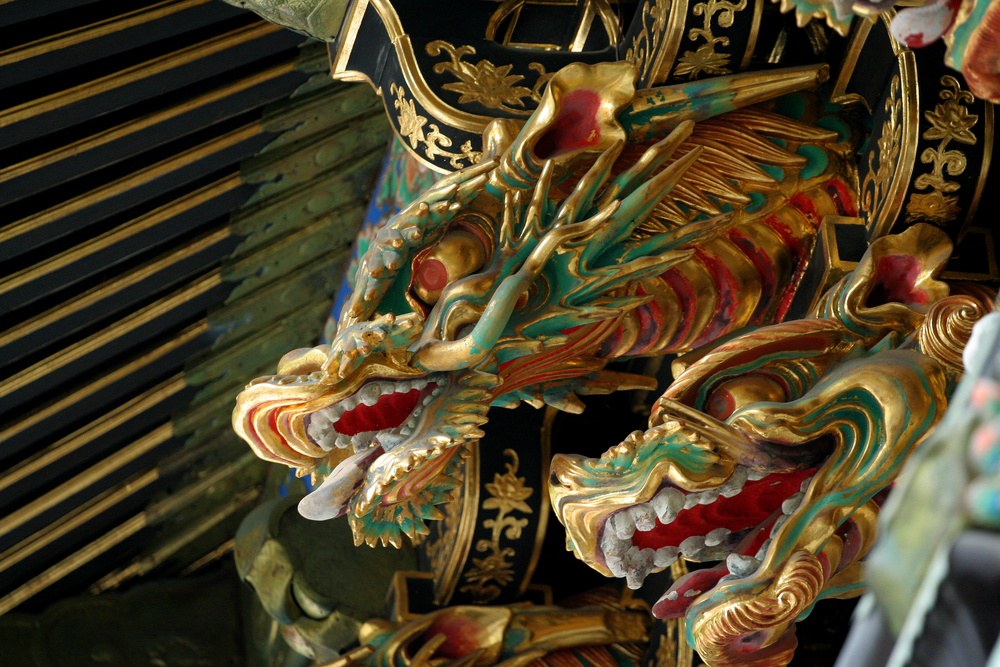 We are a Japan-based travel agency, click here to contact our experts for more information about your journey.