Travel diary to the islands of Ogijima and Megijima Saturday, the 20th of July（Setouchi triennale Summer）

After coming by night bus, the first thing I looked for near Takamatsu station, where there was hardly anyone, was obviously a restaurant of Sanuki Udon. Sanuki udon, Kagawa Prefecture, these two are now almost synonyms. This typical dish consists of a bowl of hot or cold noodles, with or without tempuras, its popularity is unmatched by udons of other prefectures and some people come from far to eat Sanuki udon. Kagawa Prefecture is therefore THE sacred place, the blessed land of Udon.
Anyway, I ordered a bowl of udon from a restaurant across the street from Takamatsu Station. Garnished with free tenkasu (fried tempura paste resembling a bit of puffed rice), green onions and a lot of sliced meat for only 410 yen, quality and quantity were clearly there.

Once I had satisfied my body and soul, I went to the port of Takamatsu, a 5-minute walk from the train station. If I had had enough time, I would have wanted to go to Ritsurin Park, Edo Era Garden, Isamu Noguchi Art Museum and Kotohira Shrine, also known as Konpira-san, but this time I decided to focus on the art festival of Setouchi and to discover the islands of Megijima and Ogijima, both close to Takamatsu and easy to reach from its port. 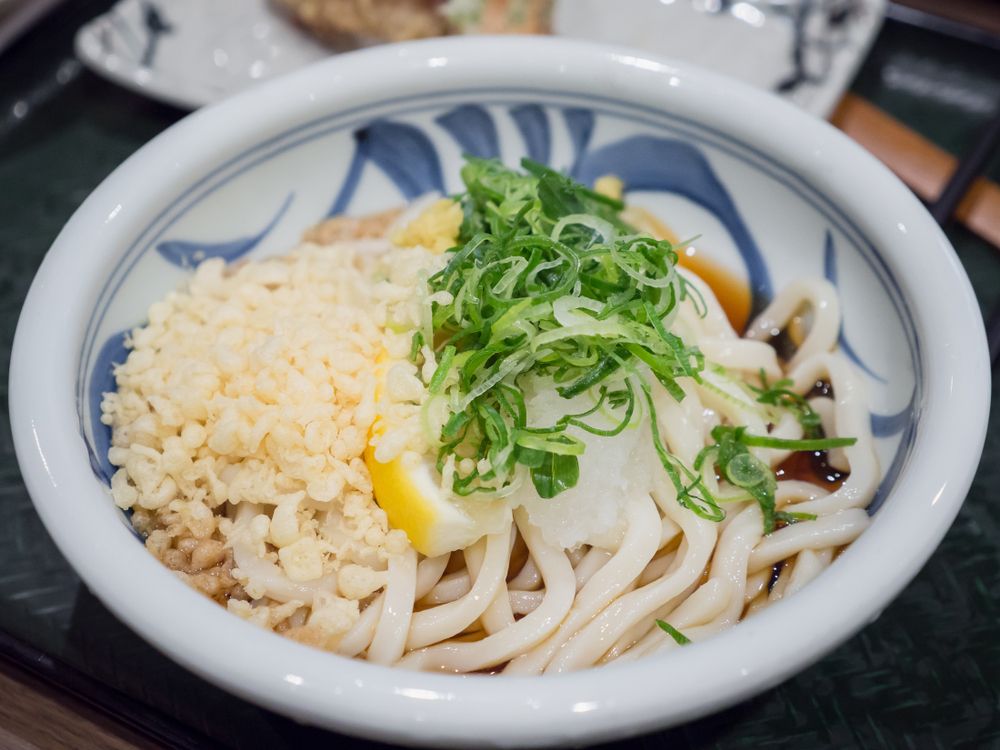 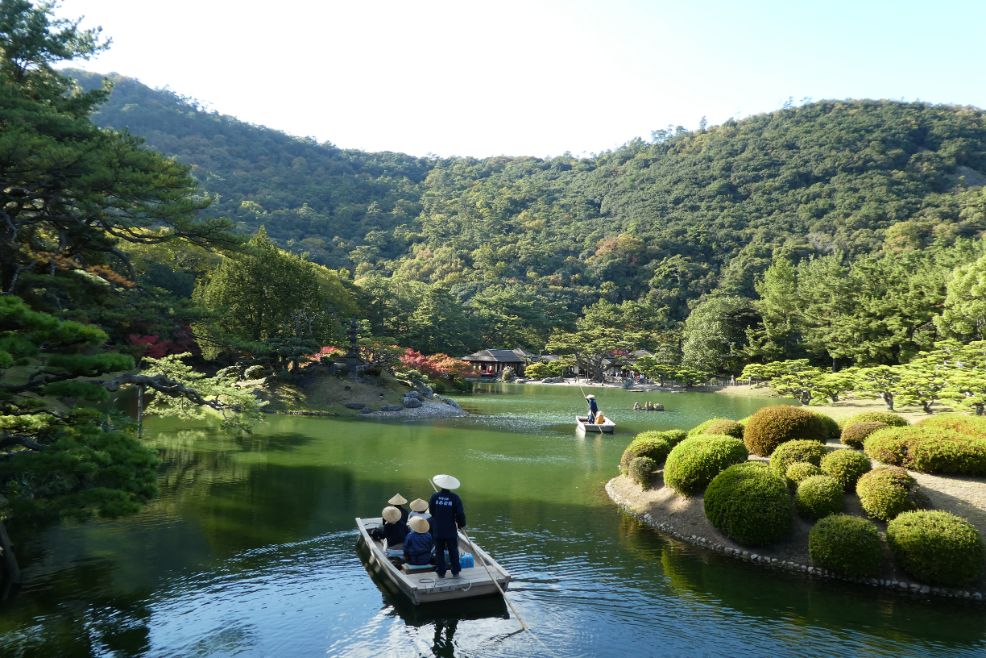 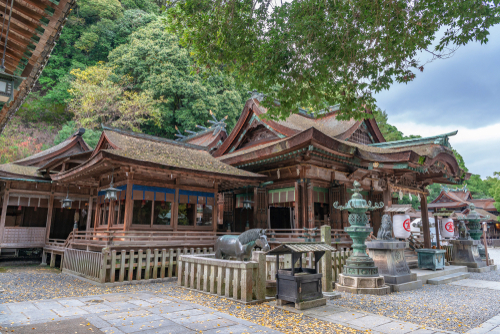 As expected, and although it was only 8 am, the ferry was crowded, many people taking advantage of the weekend to get to the festival. Arriving at Ogijima, after a 40-minute cruise, we were welcomed by the first artwork, "The soul of Ogijima" by Jaume Prensa. The work was created for the 2010 edition of the festival and is now a tourist information centre and waiting room for the ferry.

In Ogijima, which land consists mainly of a large mountain, most of the houses are built on slopes and stone walls are stacked all over the island, where the houses and fields are built. It is a small island with a circumference of about 7 km. The village is concentrated around the port and everything can be done walking. As you wander along the narrow alleyways between the stone walls, you run into cafes, restaurants, artwork… 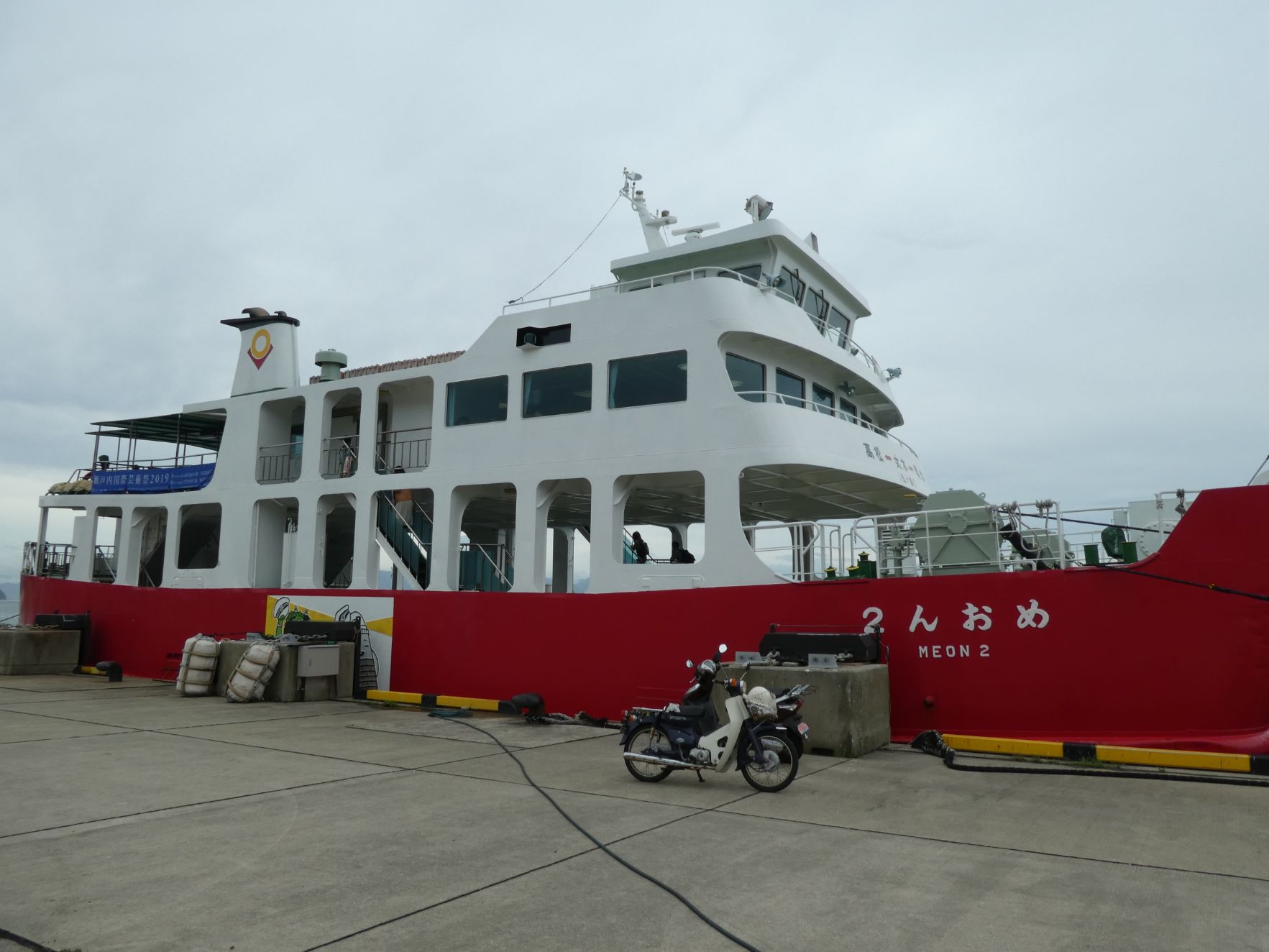 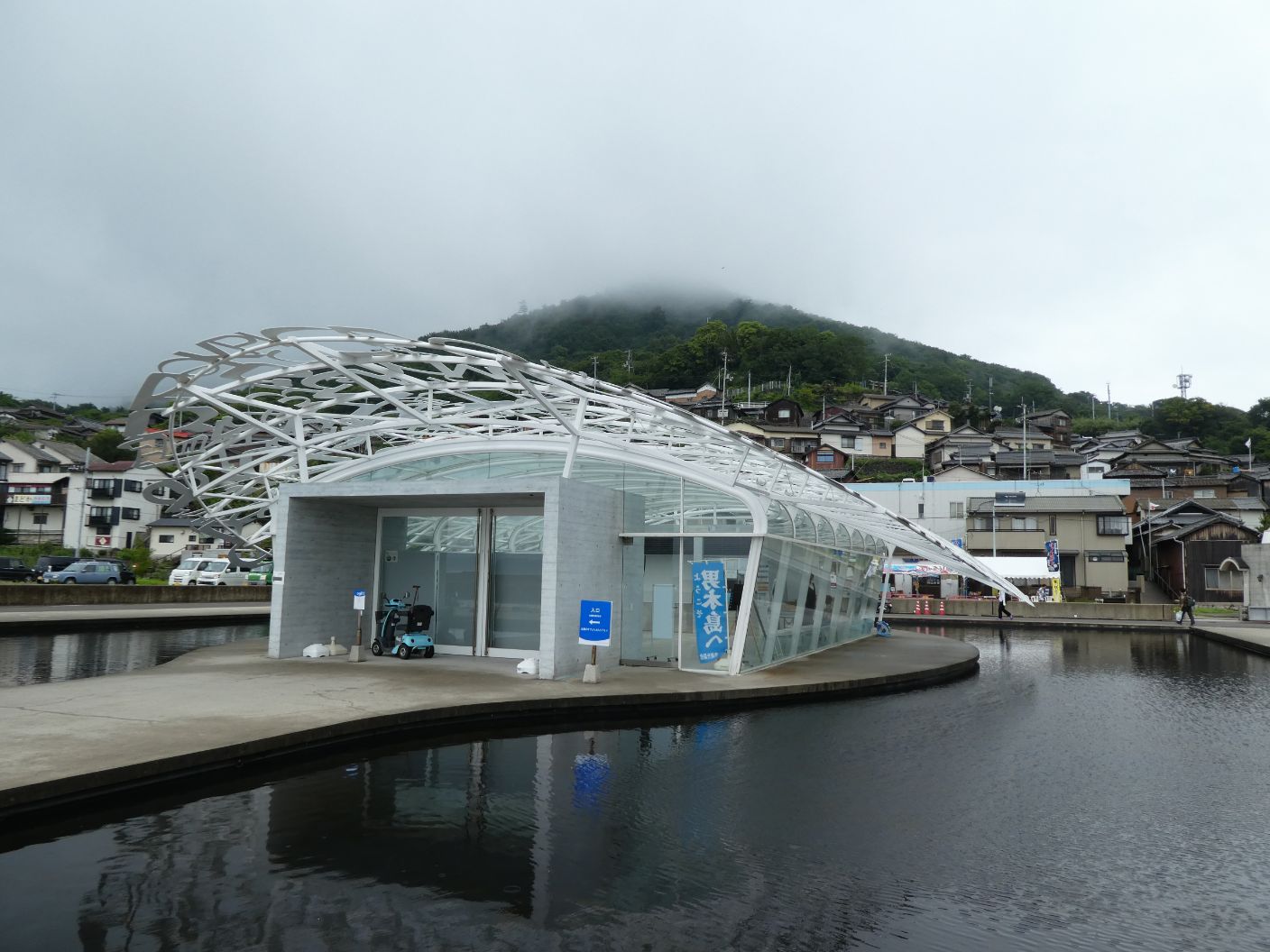 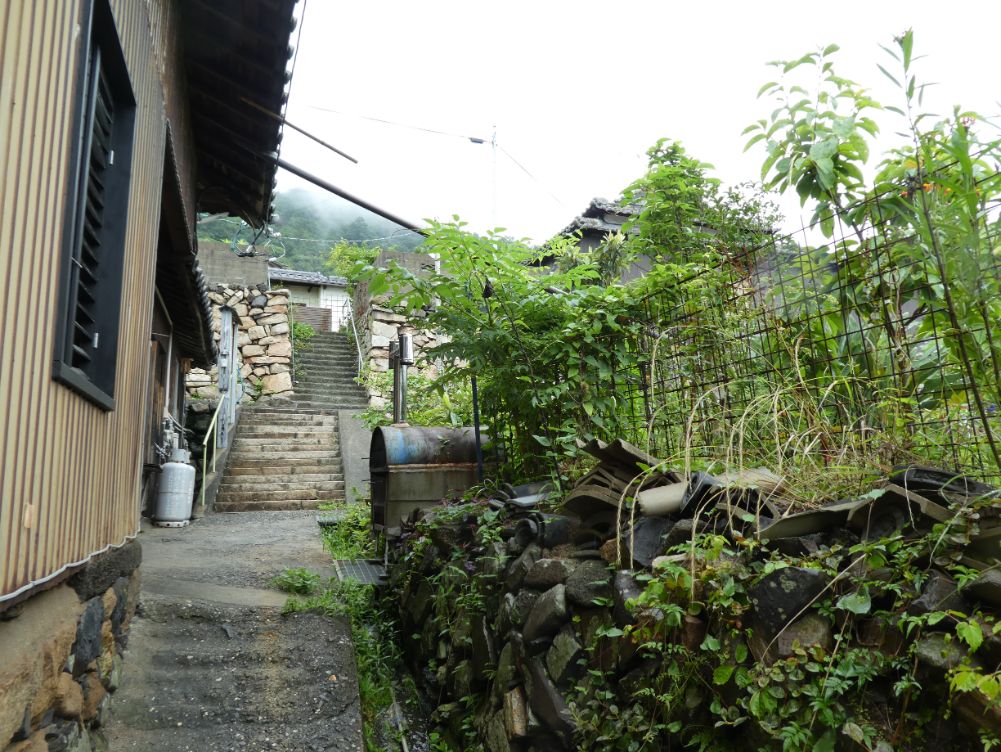 As I walked up and down the streets, like a maze, I discovered successively many artworks such as Akinorium by Akinori Matsumoto, Memory Bottles by Mayumi Kuri and The Walking Arch by Keisuke Yamaguchi. The islanders who greet each other with friendly smiles and the cats that we see hanging around the island are things that we hardly see in town. 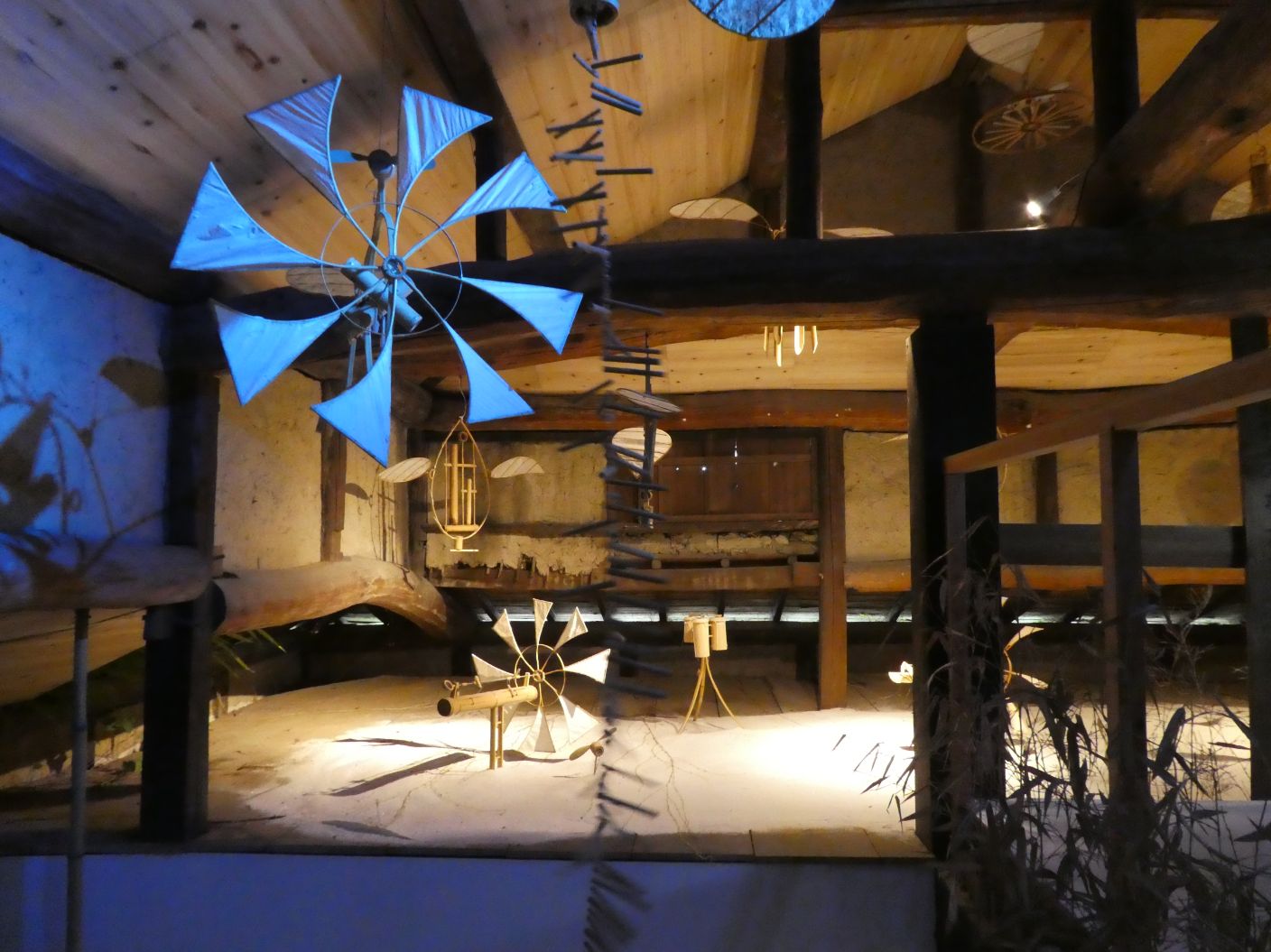 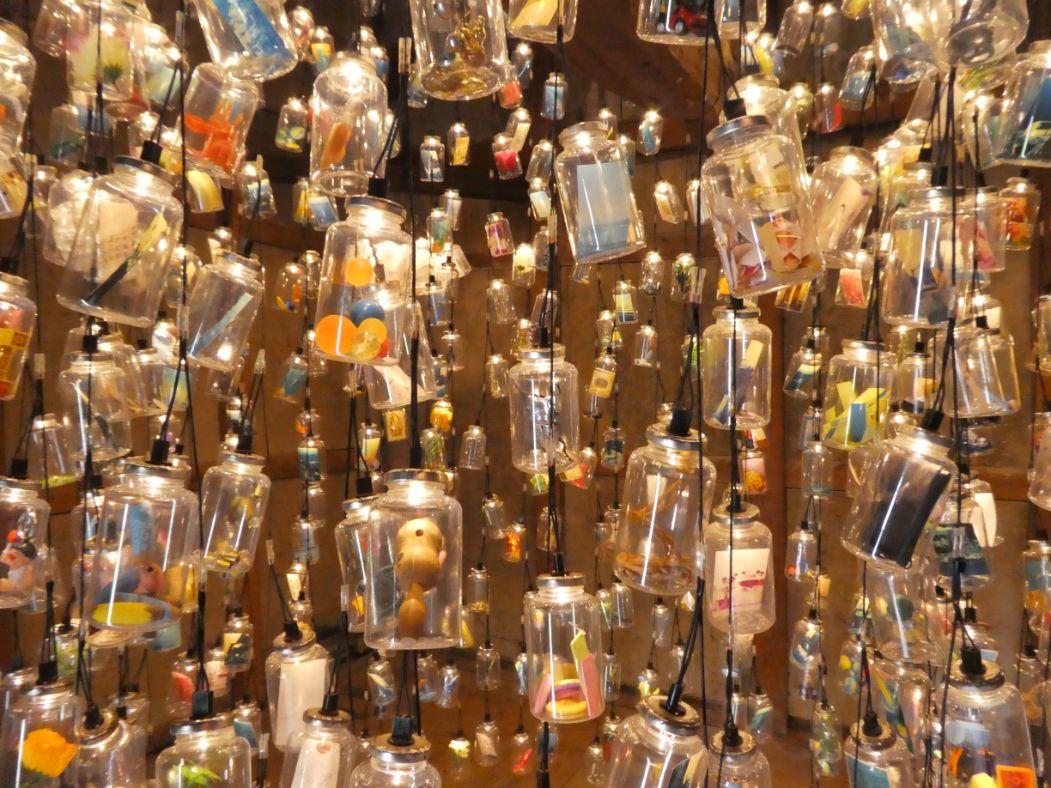 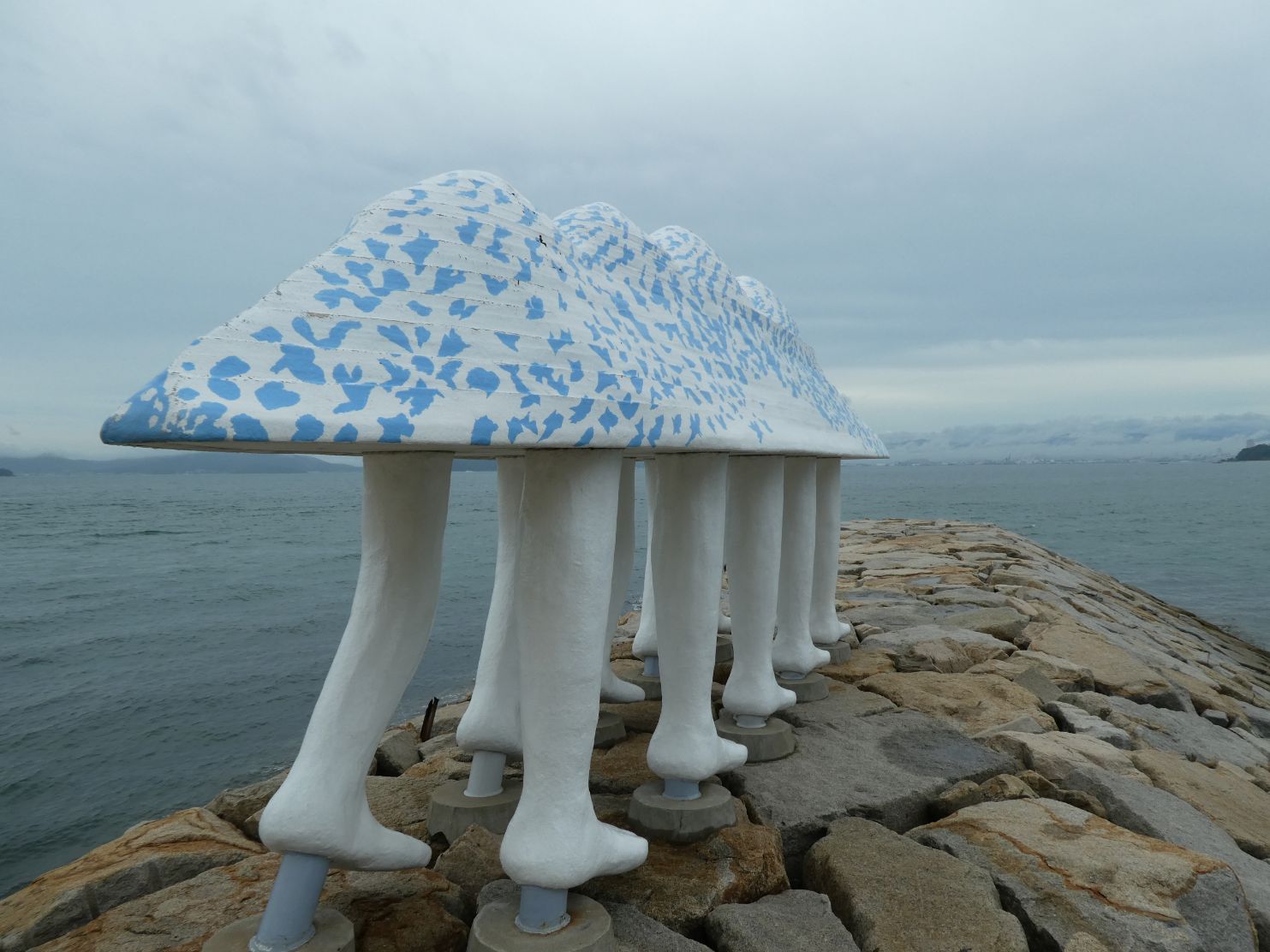 During this walk, I stopped at the local restaurant «Dorima no Ie» which serve a medicinal cuisine without pesticides and without fertilizer that does good to the body (reservation is necessary). As Ogijima is a small island, I thought I would stay only two hours, but as I was finding more and more interesting places, I decided to delay my departure, and to take the 1pm ferry for Megijima. 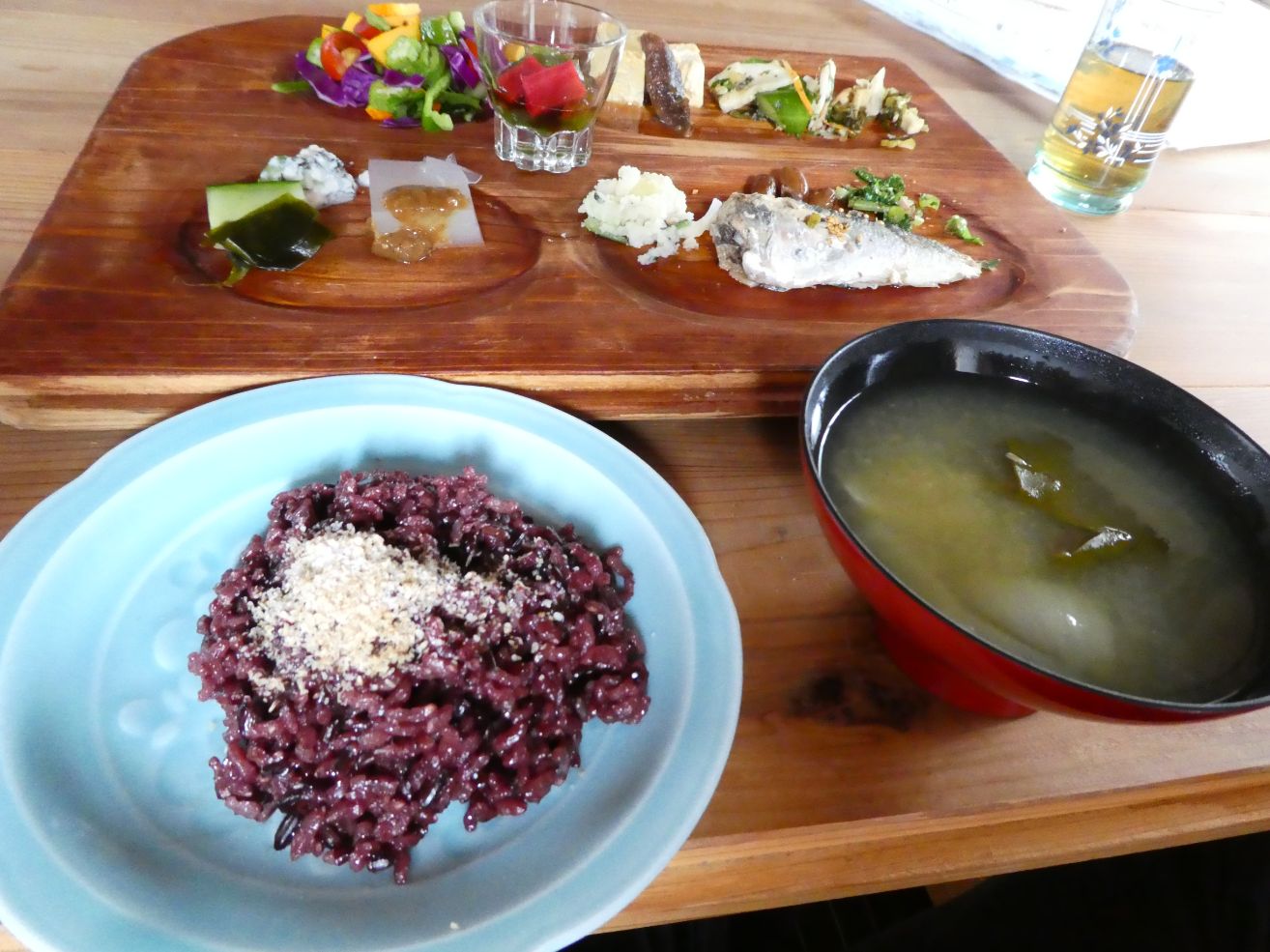 Compared to Ogijima, Megijima is a little larger and its harbour district, where the majority of the population is established, is flat. Upon arrival, the bus stop is right next door and it takes about 10 minutes to reach the summit of Washigamine. The island would have served as a model for Onigashima in the extremely famous Japanese legend of Momotaro. It is on Megijima that the young man would have defeated the demons who were hiding in the cave that we find not far from the top. When you get off the bus, many “demon” artifacts are laid out all over the place, but to tell you the truth, I have to admit that the place somehow felt like a tourist trap. No one knows when, why, by whom or how the cave was dug, which makes it interesting and you can take a look at the innumerable tiles with the effigy of demons made by the students of the prefecture of Kagawa. However the heap of objects of all kinds looked a bit cheap in my opinion. 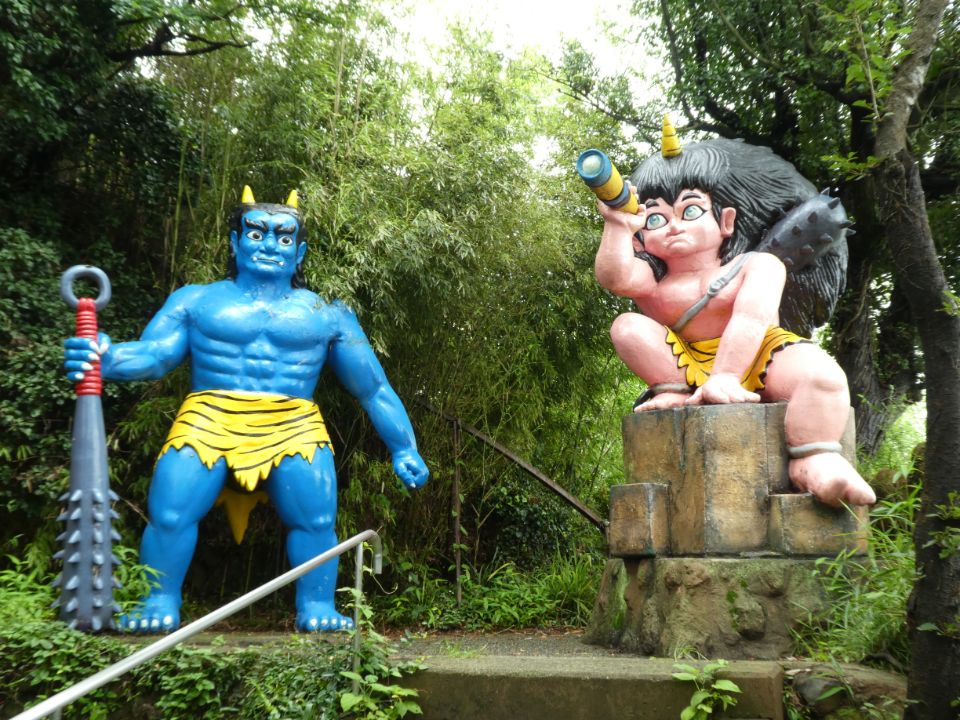 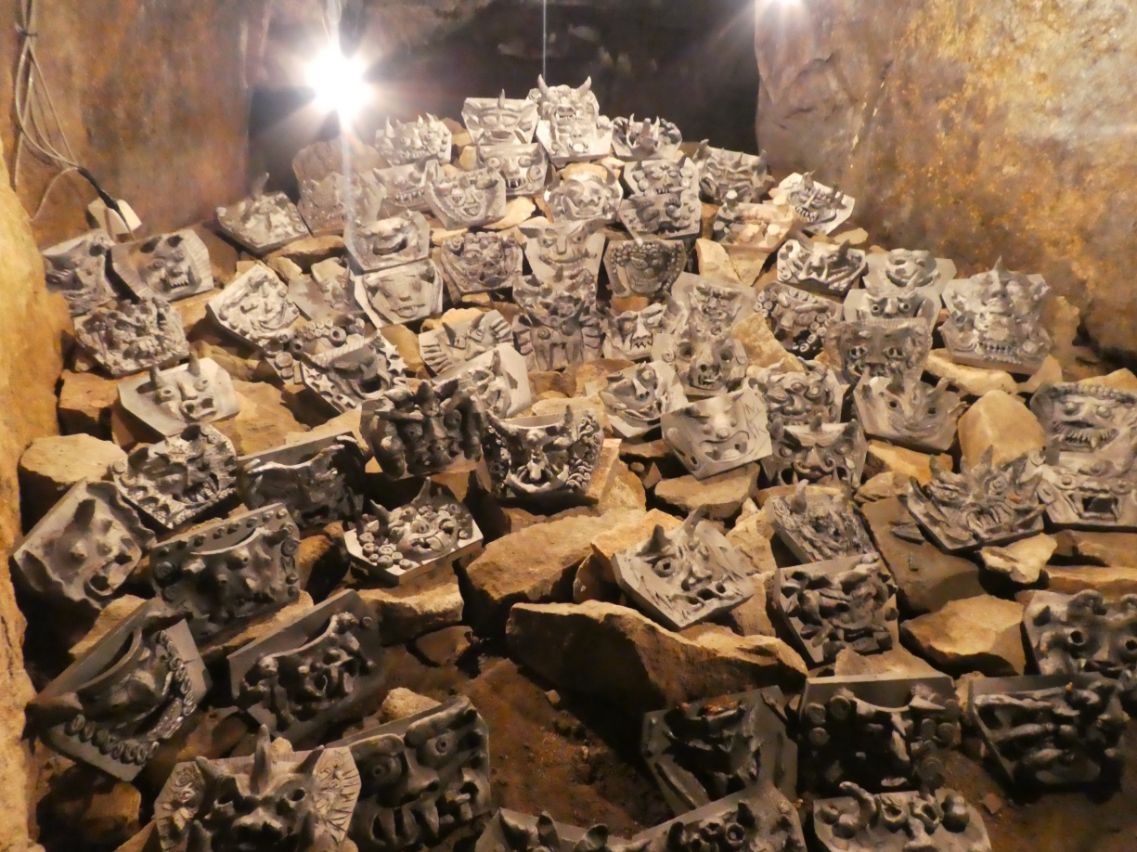 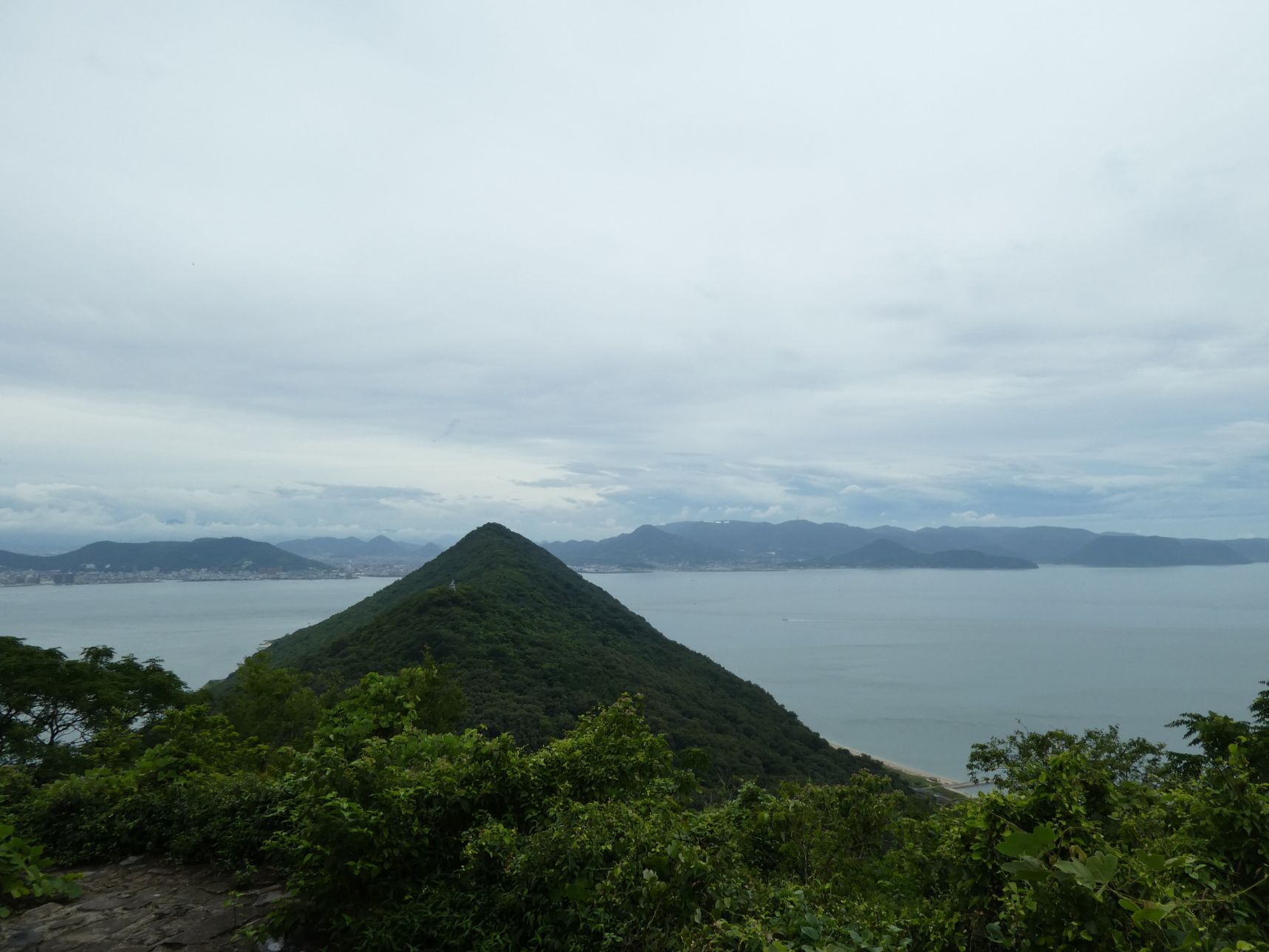 However, on my way to the observation deck on top of the mountain, I was able to enjoy a breathtaking view of the Seto Sea. While wondering if it was really worth coming all the way up here, I decided to walk back down instead of taking the bus.
On my way to the port I crossed paths with several artworks such as Yasuyoshi Sugiura’s Terrace Wind, Shinro Ohtake’s Mecon, Leandro Erlich’s Laundry. Near the port, in addition to works such as 20th Century Memories (author: Hagetaka Funjo) and The Seagulls Parking Lot (author : Takahito Kimura), the crane builder company Tadano presents a replica of one of the Easter island’s moai, which was built as a test for restoration work to come. Unlike Ogijima’s nostalgic works, Megijima’s were somewhat humourous, perhaps because of the link with the legend of Momotaro in Onigashima. 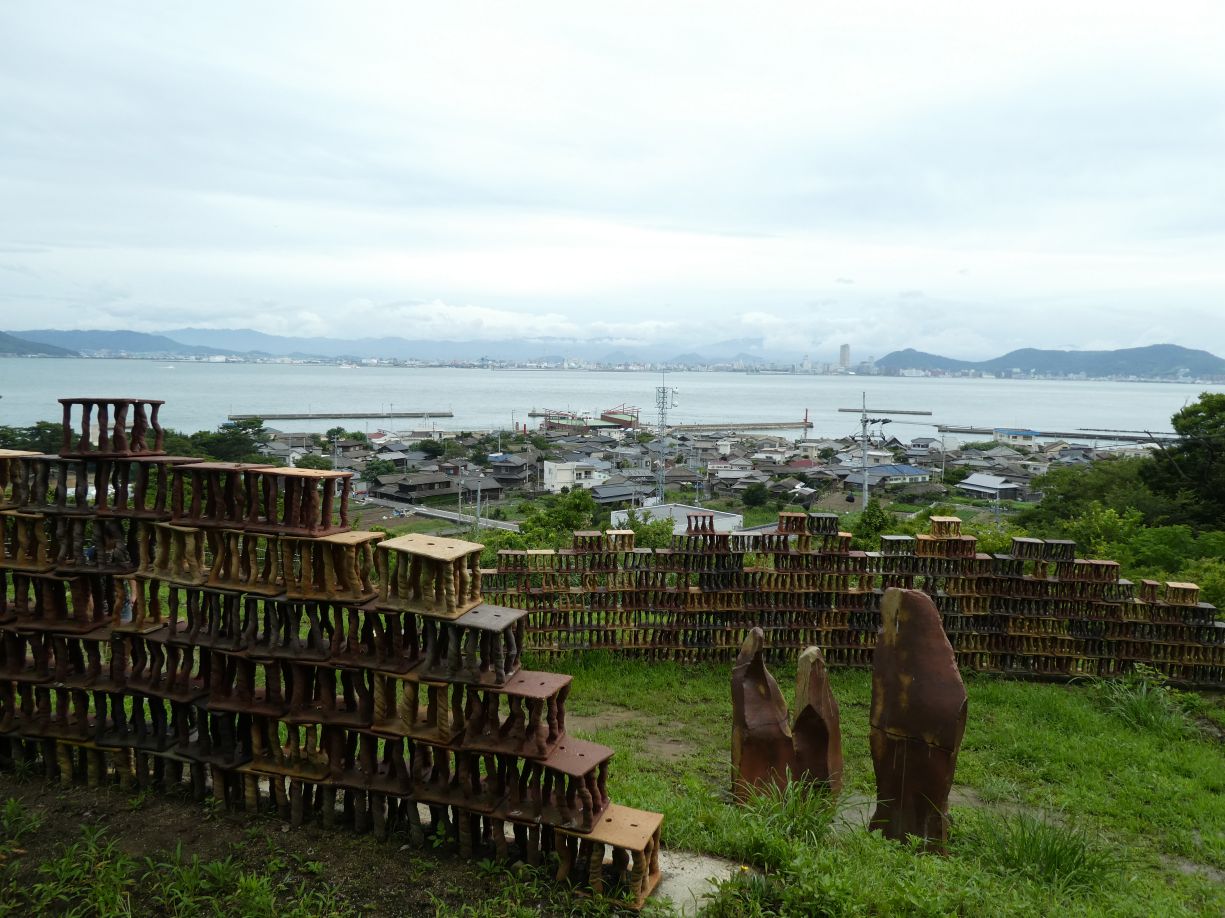 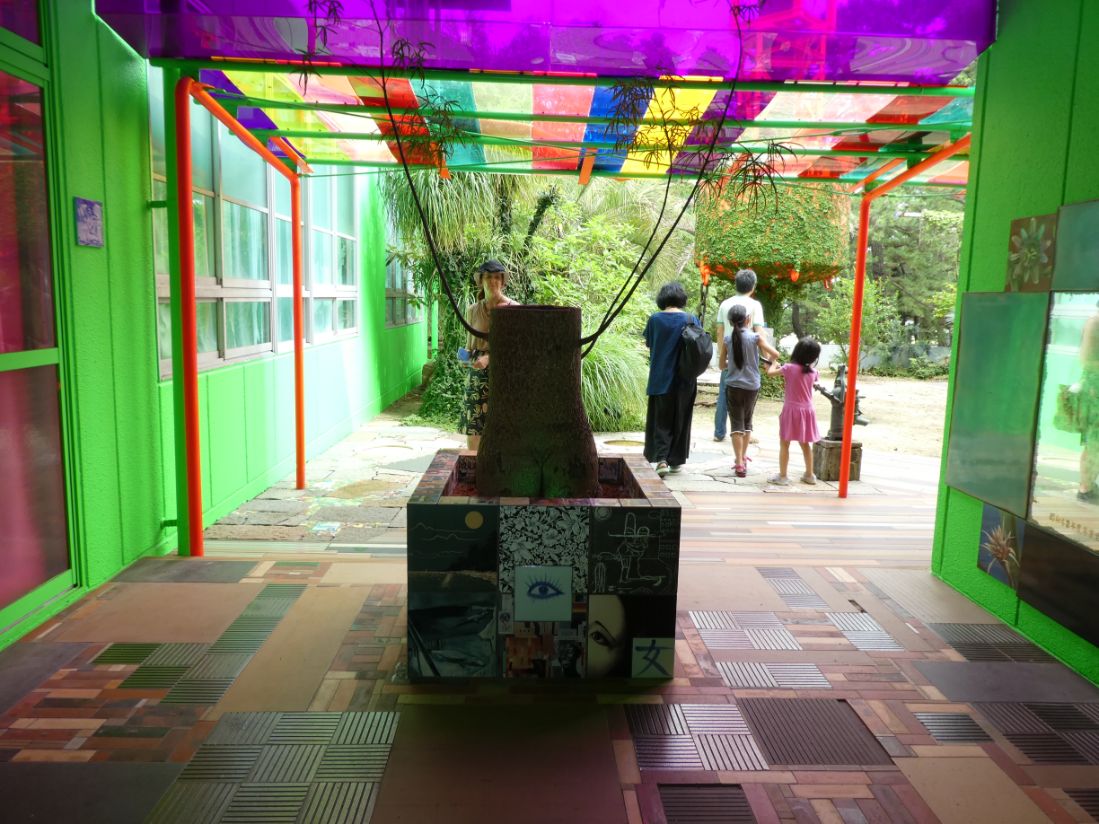 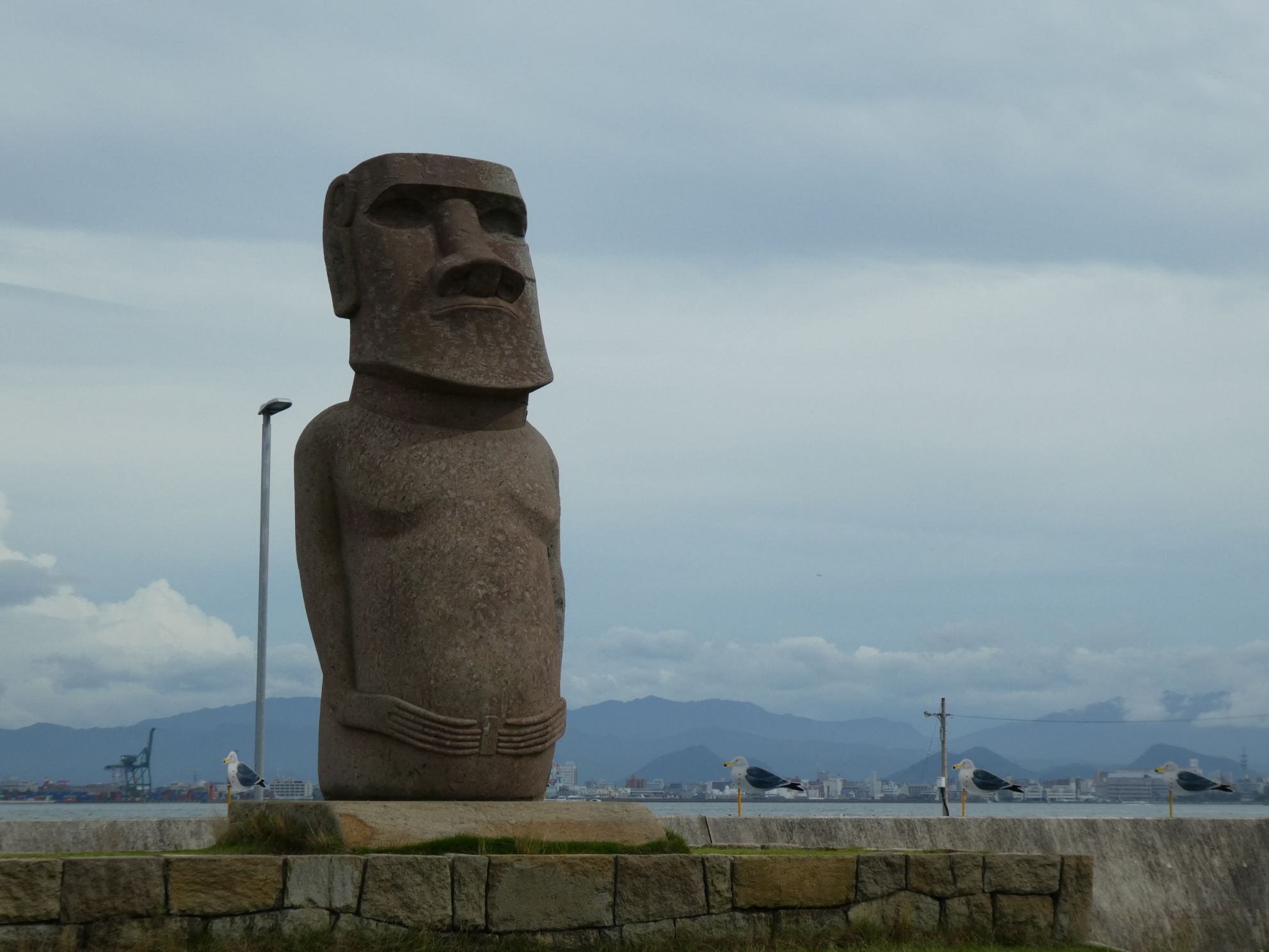 After another 20-minute cruise aboard the last ferry back to Takamatsu, I searched for one of the few Udon restaurants open at night in the bustling downtown. The time spent in Megijima and Ogijima suddenly felt like a dream to me, and while realizing this, I could not help feeling lonely.

Travel diary to the islands of Ogijima and Megijima Saturday, the 20th of July（Setouchi triennale Summer）
【Guided】Hiking through Japanese History
15 days